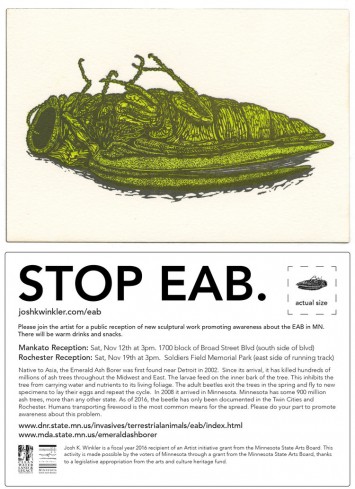 Table of Contents: February 2018 — Arts, Social Change, and a Vision for Sustainability [2]

Native to Asia, the Emerald Ash Borer was first found near Detroit in 2002.  This exotic bark beetle arrived to the U.S. in the packing material of cargo ships.  Since its arrival, it has killed hundreds of millions of ash trees throughout the Midwest and East.

The larvae feed on the inner bark of the tree.  This inhibits the tree from carrying water and nutrients to its living foliage.  The adult beetles exit the trees in the spring and fly to new specimens to lay their eggs and repeat the cycle.  Humans transporting firewood are the most common means for the spread.

In 2008 it arrived to Minnesota.  Minnesota has some 900 million ash trees, more than any other state.  As of 2016, the beetle has only been documented in the Twin Cities and Rochester areas of Minnesota.  The city of Rochester is making an effort to treat many of their ash trees on public land.  Minneapolis Parks and Recreation Forestry Department, in a proactive effort to combat the problem, is systematically removing all ash trees, infected and healthy, from the urban canopy.  Both municipalities are working with the Department of Agriculture and the DNR to prevent the spread and further infestation of the emerald ash borer (EAB) to other parts of the state.  The Twin Cities’ ash logs are being ground into burnable mulch, and some are sold for wood use products.

In the early 70s, each block of Broad Street Boulevard was a canopy of elms trees.  This grassy median was a community gathering place, and in the winter, the elms trees were heavily lit with holiday lights.  The city went so far as to run power through this median to facilitate resident-decorating of the boulevard in what was then called the “festival of lights.”

In the late 70s Dutch elm disease came through the area and all the trees were removed.  Rather than replanting the boulevard with a diverse mix of hardwoods, the city planted each block entirely in one species.  The 7100 block, the last block of the boulevard, was planted exclusively in ash.

The Mankato sculpture will stand below this canopy of living ash, all of which are around 40 years old.  Fortunately, the EAB has not yet been found in Mankato.  The Mankato sculpture is meant to promote awareness and to help prevent the spread of infested wood to this area.  If the beetle does reach Mankato, the sculpture may become an effigy to the lost trees. 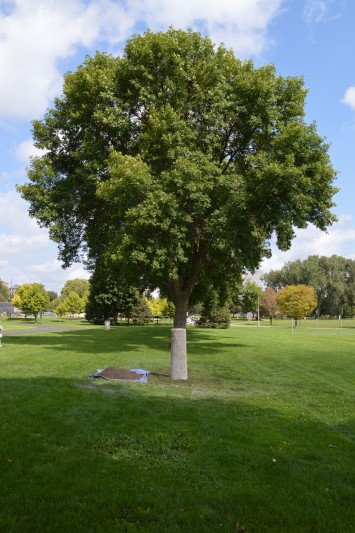 More information can be found:  http://joshkwinkler.com/eab [6]