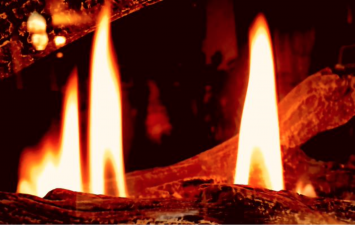 Link to the Climate Change Issue Table of Contents [2]

Abstract: This piece explores the author’s relationship with fire (domestic fire and wildfire) and the lessons inherent in a rural life that is both dependent on fire and threatened by it. It explores the curriculum of fire as one of nonattachment, of community cohesion, of the legacy of colonialism and of the connection to place.

“And every day I am confronted by the question of what inheritance I will leave. What do I have that I am using up” (Berry, 2003, p.8)?

I spent my childhood on the side of a mountain in rural Oregon, surrounded by forest lands stretching hundreds of miles to the Pacific. The houses of our nearest neighbors were invisible over the ridge, across the creek or around a bend in the gravel road. We couldn’t see them, but we heard them in the form of deer-season gunshots and firewood-season chainsaws. On quiet summer nights, when we slept outdoors, we listened to coyotes and to the rush of wind in the tops of the cedars. In winter, the roar of the creek grew louder when it rained.

Because our lives in those woods required facility with domestic fire, I learned to stack firewood, chop logs and split kindling. “Like the family itself, it takes care and patience and skill to provide warmth without too much heat. […] With every trip to the firewood pile, we take stock of our stored warmth […] stacked rows of madrone, oak, maple, fir and cedar” (Heilman, 1995, p.126). I learned to light the wood stove using slivers of wood and crumpled junk mail. I learned how to bank the fire for the night so that there would be coals on dark mornings. My earliest cooking lessons were on an enameled, wood-burning cookstove that took up most of the kitchen and was older than my great-grandmother. I learned to drive by ferrying a pickup full of firewood up and down a muddy track.

I also learned a bone-deep fear of fire: escaped fire, lightning-strike fire, human-caused   fire—fire gone wild. Rumbles of summer thunder make my stomach drop and my skin crawl. Summer in this valley is intensely hot and dry—buzzing with cicadas and sticky with overripe blackberries. We anxiously eye the sky looking for thunderheads or plumes of smoke. Fire is always on the curriculum. Vigilance is the lesson and “fire—like other big forces of nature—doesn’t suffer fools. It has no patience for our stubborn refusals to acknowledge the realities of our time” (Ferguson, 2017).

David Gruenewald (2003) coined the term “critical pedagogy of place” to describe a school of thought that “aims to contribute to the production of educational discourses and practices that explicitly examine the place-specific nexus between environment, culture and education” (p.10). If there is a pedagogy of place, then there surely must be a curriculum of fire. Rural places have always been taught the lessons of fire, but now Sydney, San Francisco, Calgary and even Oslo are all being tested as climate change takes hold in earnest and the fires grow more common, faster, larger and more deadly.

As I write this, my childhood home (my red-clay, serpentine, Madrone and Ponderosa home-place) is under Level-Three: “Go Now!” evacuation. Flames have crested the ridge and a National Guard roadblock at the bottom of the hill keeps nervous residents out. Churches have mobilized to help evacuees—offering prayers, sandwiches, and cots in the sanctuary. Hundreds of firefighters toil in the scorching summer heat, trying to slow the dragon’s advance. The drone and thump of firefighting aircraft fills the smoke-choked air. Livestock and pets have been bundled into trailers. Ash-covered pick-ups are stuffed full of family photos and precious belongings.

Even before the COVID-19 pandemic made face masks ubiquitous, students in our valley wore smoke masks for a few weeks every fall.  Air-purifiers purr ineffectually in drafty hallways and we obsessively check the air quality, looking for numbers safe enough to let children play outdoors. Some children (already made refugees by terrifying conflagrations that roared thorough Paradise, California and Phoenix, Oregon) eye the adults skeptically and look ready to bolt. They don’t have any reason to trust that this place is any more permanent than their lost Paradise–than their Phoenix reduced to ashes and yet to rise.

I’ve been grappling recently with what it means to feel deeply connected to a place to which I have no ancestral claim.  What happens when that place is threatened?  What does it mean to receive a place-specific education in the destructive and regenerative curriculum of fire? How do I make peace with the lessons that fire teaches?

Before the white settlers came, this place had a different curriculum of fire that shaped the landscape and its people.

Northwest Native Americans used fire in fire drives of deer and elk and in gathering species such as grasshoppers and tarweed. But more than this, they used it to create environments suitable for some of their most-favored food plants […]. Firing in the camas fields, huckleberry fields, oak groves and tule flats […] took place after harvest, as a kind of post-use cleanup process, with ecological consequences in following seasons. (Boyd, 1999, p.2)

White settlers discouraged the Native system of controlled burns and eventually slaughtered and displaced the Indigenous people of this valley. In my attachment to my home-place, I experience the paradox of both a visceral connection to the land and the guilty unease of the interloper.

The creek that cuts through our valley empties into the Rogue River at traditional fishing grounds where salmon run and giant sturgeon lurk in the deep. The creek is named after a warrior who is remembered for his long fight to preserve his territory. His name is recorded as Chief Tyee Limpy (Oregon Websites and Watersheds Project, 2007). However, since it was the settlers doing the recording, I don’t know what name his parents gave him or what name his children called him by. It’s been well over a century since the Rogue River Wars (and the subsequent, genocidal removal of much of the Indigenous population of the valley) (Beckham, 1996). In that time, most white residents of the region have forgotten that Indigenous people were slaughtered and cheated and displaced to make room for orchards, gold mines, railroad tracks and lumber mills. Knowledge of Native burning practices was suppressed (Kay, 2000) and what might yet save us has been buried under decades of disregard and contempt for Indigenous expertise.

By the time my hippie, back-to-the-land parents arrived on the banks of that creek, with a baby and a flatbed pickup full of goats, the Seventh-Day Adventist elders up the road took one look at my young parents and gathered them close… tie-dye, tofu, hubris and all. They taught my father about curing firewood so that we wouldn’t fill our cabin with smoke from green logs. They taught my mother to preserve fruit, to raise chickens and to cook hearty vegetarian meals. At Halloween, they gave my brother and I dried apples and molasses cookies. They worried about our immortal souls and preached a little gentle, apocalyptic fire and brimstone. Fire again.

On that red-clay hillside, my parents raised goats, chickens, and children. They planted gardens, fruit trees and a few discretely hidden marijuana plants. They built a cabin, barns, a home and a lifetime. Now, all these years later, my mellowed parents are the elders. Displaced and unsettled. My father’s breathing is labored now, damaged by too many days in the smoke. He learned that particular fire lesson far too late.

Gruenewald asked “What happened here? What is happening now? What should happen here?” (2008, p.339) and “What needs to be conserved, transformed, restored or created here” (p.339)? When applied to fire, the answers to Gruenwald’s questions, are contentious, not least because of fire’s complicated entanglement with the shrinking timber industry.

As timber production dropped in the Pacific Northwest (for reasons of overharvesting, environmental regulation or the globalization of the industry…depending on who you ask) poverty, outmigration and social insecurity increased (Hubbard & Elias, 1993).  A 2003 study found that only 51% of those who lost their wood-products jobs in the 1990s were still employed at all by 1998 and that those who did find new jobs in other sectors saw their wages drop significantly (Helvoigt et al).

How we respond to fire in the abstract is as much about our identity, our anxieties and our roles in our rural communities as it is about anything else. If timber livelihoods are disappearing, who, then, are the people whose people came here to cut timber? What is left of that place-linked identity? Who are their children? What is left when the reason a community came into being is gone?  In fact, “… the question of what constitutes a community in the context of a rural landscape is not straightforward…” (Carol, 1995, p.155).

All of this influences how we answer fire questions. Are fires caused by over-logging or by not enough thinning of the forests? Is fire a necessary part of a healthy ecosystem or a tragic waste of valuable timber? The answers we give to these questions are identity markers. We know the vocabulary: ladder fuels, fuel load, salvaged board feet, pine bark beetle, anthropogenic warming, risk reduction. We lob them at each other from behind our ideological fences. But when fire sizzles and crackles through the woods, when it’s no longer an abstract concept, but terrifyingly concrete, we turn to each other for help.

There are ten standard firefighting orders that guide firefighters in responding to fire behavior. They were written as operational instructions to firefighters but one of them applies to the rest of us in fire country as well:

Last summer, thousands of homes in my valley were lost in one awful day as fire raced northwards, driven by scorching winds and tearing through several small towns. Orchards and vineyards, subdivisions, apartment buildings, grocery stores, churches, mobile home parks… even the fire station was leveled. Metal buildings melted and buckled. The highway was covered in giant red splashes from arial retardant drops. Nothing but knee-high rubble and ash remained. Puddles of aluminum that were once radiators glisten under blackened skeletons of trucks. Highway guardrails droop where the wooden posts have burned away and the softened metal sagged.  Road signs are blistered and bleached by the flames. Then, unexpectedly along the path of the fire, a building, a park, a stretch of orchard is mysteriously untouched. The wind must have shifted direction for just a few moments; just enough to spare the house, the church or the vegetable garden before it returned to its roaring, devouring path.

The sky is thick with smoke, the air an unhealthy orange. Our eyes and throats are raw and the fires keep burning. When tested, though, we know the answers. Move fast. Grab the important papers and the baby pictures. Load up the animals. Check on your neighbors. Hose down your roof and get out!

Hutchinson (2004) wrote that “Something in us comes undone as our moorings to tangible places, history and natural history are severed” (p.ix). I suppose this annual threat of destruction keeps me moored to this tangible place where I learn and relearn the curriculum of wildfire every scorching summer. Be alert. Keep calm. Think clearly. Act decisively. Nothing is permanent and nothing is promised but change.

Beckham, S.D. (1996). Requiem for a people: The Rogue Indians and the frontiersmen. Oregon State University Press.

Berry, W. (2003). The art of the commonplace: The agrarian essays of Wendell Berry. Retrieved from https://ebookcentral.proquest.com

Carroll, M. S. (1995). Community and the Northwestern logger: Continuities and changes in the era of the spotted owl. Westview Press.