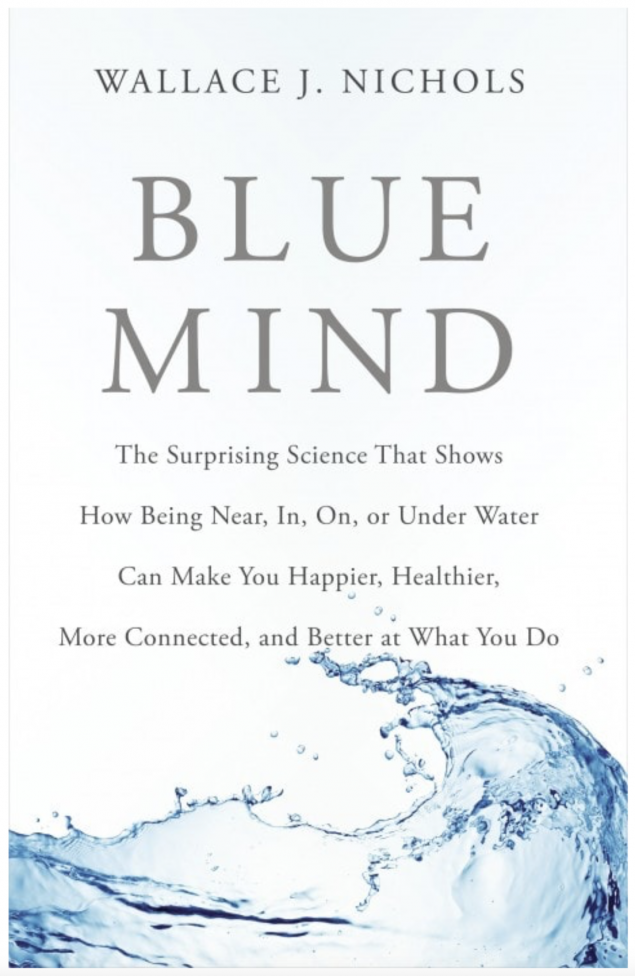 Abstract: This is a media review of Dr. Wallace Nichols’ (2014) text Blue Mind: The Surprising Science That Shows How Being Near, In, On, or Under Water Can Make You Happier, Healthier, More Connected, and Better at What You Do—with a specific focus on the book’s perspectives on the connections between water and climate change. The review describes the book as a sentinel text, noting that “its related summits have similarly set the stage for continued dialogue and research on our preference for water and the unique qualities that proximity to water has on our overall wellness.” The review specifically illustrates the ways in which the book “offers readers important strategies for dealing with the emotional challenges associated with climate change as well as suggests important insights into climate advocacy.”

Every once in a while, a book will come along that seamlessly articulates complex concepts and makes sense of involved notions in a way that simultaneously seems to reaffirm and expand our understanding. Blue Mind: The Surprising Science That Shows How Being Near, In, On, or Under Water Can Make You Happier, Healthier, More Connected, and Better at What You Do (2014) is such a book. Insights from this influential, research-based book go well-beyond the confines of the page, inspiring an educational movement with a message that purposefully includes the cognitive, emotional, psychological, social, and spiritual health benefits of aquatic environments. Blue Mind, by marine biologist and California Academy of Sciences research associate Dr. Wallace J. Nichols, offers readers important strategies for dealing with the emotional challenges associated with climate change as well as suggests important insights into climate advocacy.

In an effort to explain the particular uniqueness of the human water connection and to focus research efforts that support the science behind our emotional attachment to water, Nichols (2014) developed the concept of Blue Mind, which he defines as “a mildly meditative state characterized by calm, peacefulness, unity, and a sense of general happiness and satisfaction with life in the moment” (p. 6). The general premise of Blue Mind centers on the recognition that although nature, in general, has the capacity to make us happier, healthier, more connected, and better at what we do, water has specific traits that make it a special influence on our overall wellness (Nichols, 2014). Nichols (2014) stated, “Water’s amazing influence does not mean that it displaces other concerted efforts to reach a mindful state; rather, it adds to, enhances, and expands” (p. 7).

Figure 1. Blue Mind: The Surprising Science That Shows How Being Near, In, On, or Under Water Can Make You Happier, Healthier, More Connected, and Better at What You Do (Nichols, 2014).

Historic Perspective
We can look to evolutionary theory, history, and religion for anecdotal evidence that supports our deep emotional connection to water (Mador, 2014). Throughout history and across cultural divides, people have sought the restorative powers of water, from ancient Greeks and Romans to modern practices of forest bathing in Japan (Fagan, 2011; Mador, 2014). Additionally, water has been a focal component, central to virtually every religion in the world (Mador, 2014), from rites of Christian baptism to Hindu immersion in the Ganges River.

Despite its spiritual significance, today, there is a dominant Western cultural view that associates water as an economic resource, rather than a spiritual one. A dominant proportion of the literature defines water in terms of its physical properties or its economic and ecological value (Schwartz, 2016). Despite references to its presence in copious religions, rarely is there mention of the emotional value that water can bring. Recognizing that dialogue on water is commonly oriented solely around three Es, economic, ecological, and educational properties, Nichols (2014) emphasized the importance of the emotional piece in the equation, calling it the fourth E. Nichols (2014) argued, “Beyond our evolutionary linkage to water, humans have deep emotional ties to being in its presence” (p. 17).

To support his thesis, Nichols offers a comprehensive array of diverse studies from neurobiology, cognitive psychology, and social psychology to help explain our deep primordial connection to water and its vast therapeutic benefits. The book eloquently flows from chapter to chapter using anecdotes and diverse research to support each field of his title, The Surprising Science That Shows How Being Near, In, On, or Under Water Can Make You Happier, Healthier, More Connected, and Better at What You Do. Nichols (2014) argued that “Time and time again, researchers have discovered that proximity to water strengthens the positive effect that environment has upon well-being” (p. 63).

While serving as a type of meta-analysis, this sentinel book and its related summits have similarly set the stage for continued dialogue and research on our preference for water and the unique qualities that proximity to water has on our overall wellness. The annual, collaborative Blue Mind Summit has assembled diverse groups of global leaders, scientists, explorers, artists, and athletes who share the mission to change the conversation about the true value of our ocean and wild waterways for good and convert this movement into common knowledge. For instance, Mathew White, a Blue Mind Summit 8 presenter, along with a research team from the pan-European initiative BlueHealth, found that living near England’s coastline is linked with better mental health (Garrett et al., 2019).

While not specifically written as a climate change reference, Blue Mind offers a distinctive blueprint to navigating the uncharted waters of changing climatic conditions. Providing research that details the cognitive and emotional benefits of water has significant real-world applications from medicine to conservation as well as to our happiness and general well-being. Additionally, given our shared neurological connection to water, Nichols offered a way to find commonalities that may help to build bridges across the climatic divide and potentially unite insular groups. Furthermore, recognition of the vast therapeutic benefits of water may offer solace for the emotional stress that is often associated with climate-related issues.

Climate Advocacy
Having a nuanced approach, such as those sustained in Blue Mind are particularly important given research suggests that people view and respond to climate change in different ways (Roser-Renouf et al., 2015; Leiserowitz 2010). Additionally, different messaging strategies are needed in order for climate advocacy to succeed (Roser-Renouf et al., 2015). Leiserowitz (2010) and his team of researchers from Yale, found that people get their information from various sources and suggest that some dismiss science and scientific facts as a relevant source of evidence for a changing climate. In a recent interview, Nichols suggested that conservation and climate advocacy strategies that focus on facts do not always work. He noted, “Instead of overwhelming people with facts, it’s time to make the global water issues more personally relevant to our day-to-day lives on an affecting level” (Nichols, 2020). Communication researchers indicate that presenting climate change issues from such a perspective can engage segments of the public who are otherwise disengaged or dismissive of the issue (Myers et al., 2012).

Galvanizing Water Advocacy
Blue Mind advanced copious research that helps illustrate how our emotions trigger various neurochemical reactions within specific parts of the brain. The book details research on how water seems to trigger the parts of the brain associated with empathy and compassion, encouraging a shift from ‘me’ to ‘we’ (G. Kim et al., 2010; T. Kim et al., 2010). Research has suggested that these types of shifts in which we see ourselves as being part of something bigger may have profound implications on prosocial behaviors including conservation efforts (Piff et al., 2015). Exploration that maps out our brain activation patterns of emotion also helps to give more validity to our connection with nature and water as well as helps motivate conservation efforts. Nichols terms this phenomenon as neuro-conservations, in which our shared innate connection with water amplifies and unites protection, preservation, and restoration efforts.

Climate and Water
Although the full impact of climate change on water is uncertain, it is well-documented that climate instability will have profound implications on the hydrological cycle, water resources, and availability (Barnett et al., 2008; Kristvik, Muthanna, & Alfredsen, 2019; Schewe et al., 2013). Within this context, messages such as the ones offered in Blue Mindwhich inspire, engage, and unite people seem particularly vital given the severe climate-generated degradation that is occurring to ocean and river ecosystems. Threats such as sea level rise, acidification, and loss of biodiversity are just a portion of the world water-related issues we face.

Multifaceted
Climate change issues are complex, multi-faceted, and interconnected requiring us to view the world and all of its processes from a systems perspective (Chirico & Farley, 2015).  Achieving sustainable solutions within this unpresented, evolving territory necessitates a collaborative, creative, and cross disciplinary approach (Hansen & Hoffman, 2011; Nichols, 2020). Gross (2013) suggested that findings from neuroscience and similar disciplines such as the ones offered in Blue Mind helps to unite various disciplines from both hard science and soft science, providing support and validation to add emotional elements to their work. A non-siloed, trans-disciplinary approach, such as those offered in Blue Mind seems critical given the nature of these wicked problems.

Our Best Selves
Throughout the book, Nichols introduces research from psychologists and neurologists that suggests water helps us restore and in the process inspiring creativity, the precise skill set essential for climate related solutions. Psychologists and neurologists have found that being in, on, around, or near water can help us access a state that allows our brains to restore, which can lead to enhanced cognitive performance, creativ­ity, and problem solving abilities (Carter et al., 2014; Feinstein et al., 2018; , Janata, 2012; Völker, & Kistemann, 2011). Wallace noted, “Water unleashes the uninhibited child in all of us, unlocking our creativity and curiosity” (p.192). Furthermore, Nichols (2020) suggested that water makes us our best selves, and positions us to be able to more creative, collaborative, and cross-disciplinary, the basis of sustainability and addressing climate-related issues.

Emotional Salve
Examining the global burden climate change is having, the World Health Organization (WHO) identified climate change as one of the greatest health threats of the 21st century (2016, 2018). As evidence of the direct harmful health effects of global climate change continues to grow, so too does the evidence suggesting climate change is adversely impacting our emotional health. Doherty and Clayton (2011) identified three distinct ways the climate crisis is influencing mental health and declared climate-related issues will continue to have significant negative effects on mental health and wellbeing, particularly for marginalized populations.

The Blue Mind message offers a potential salve for the intense anxiety and emotions associated with the unprecedented scale of the current and future impact of climate instability. Interestingly, Nichols (2020) argued, “the benefits of Blue Mind affects those who need it most.” This is not to say that soaking in water will solve all of the impacts associated with current uncertainties, but it is to suggest that strategies that promote mental restoration, foster connectivity, enhance creativity, and support our overall mental health seems to be needed more than ever.

Blue Mind is a well-written, thoroughly supported, and informative book that showers the reader with numerous meaningful insights. The most salient impression is perhaps Nichols’ ability to bring the emotional benefits of nature—particularly water—to the surface. In the process, not only does this give scientific license to embrace the emotional quotient, but due to its importance and relevance, require its inclusion in the conversations regarding climate change and other sustainability issue. In addition, this work offers nuanced strategies for conservation initiatives, helps to galvanize advocacy, and inspires action to protect healthy water. After all, we protect what we love. Nichols effectively concluded, “You need water. And water needs you. I wish you water!” (p. 276).

Fagan, B. (2011). Elixir: a history of water and humankind. Bloomsbury Publishing USA.

Hansman, H. (2019). Downriver: Into the Future of Water in the West. University of Chicago Press.

Nichols, W. J. (2014). Blue mind: The surprising science that shows how being near, in, on, or under water can make you happier, healthier, more connected, and better at what you do. Little, Brown.

Völker, S., and T. Kistemann (2011) The impact of blue space on human health and well-being–Salutogenetic health effects of inland surface waters: A review. International Journal of Hygiene and Environmental Health, 214(6): 449-460.