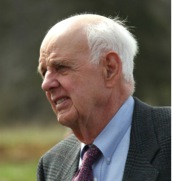 Abstract: This essay chronicles three experiences I had within a matter of days that clarified for me how easily the good sense of Wendell Berry’s thinking is drowned out by the reductive presuppositions of modern industrialism and how necessary his thinking is for our hope of survival. With ecological damage happening on a larger and larger scale, it seems more urgent than ever that we understand Berry’s philosophy. We must change our actions and expectations to align with the demands of nature and quit trying to bend nature to our desires.

Why We Need Wendell Berry

Following the hottest year on record for Earth, as we talk again about rolling back air-quality standards or building the Keystone XL Pipeline, we need to be reminded why we need Wendell Berry. This writer-thinker-farmer from Kentucky has been making his case now for over fifty years—in fiction, poetry, essays, interviews, and speeches—that we need to change our thinking and our living if we want to continue to live. His message is cautionary and instructive; his tone is always hopeful. Indeed, in the introduction to his collection of essays The Way of Ignorance (2005a), he writes that all his work is “motivated…by fear of our violence to one another and to the world, and by the hope that we might do better” (p. x). We need to listen to him. Steeped as we all are in the narrow, compartmentalized analysis of industrialism, our culture has been taught to value quantity over quality, competition over cooperation, efficiency over effectiveness, standardization over diversity, and the ease of today over the possibility of tomorrow. We have been taught to disregard natural limits and disdain what is small. These are the lessons for despair and our eventual ruin. What we need instead are the lessons of Wendell Berry, the lessons of hope.

Among other things, Berry believes, as he told me in an interview, “It is not forgivable to do permanent damage to the ecosphere,” and that foundational perspective pervades his work, from farming to writing. It leads him to practices of stewardship and peaceability. It gives him hope, and I believe the world would be a kinder, healthier, better place if more people embraced Berry’s ideas and disciplines. As I was writing a dissertation on Berry, three things happened to me in the span of a few days in March 2012 to clarify how thoroughly dominated and reduced we are by the lessons of modern industrial culture and how urgently we need the lessons of Wendell Berry.

The first was a feature in Time Magazine, entitled “10 Ideas that Are Changing Your Life.” While several of these ideas seemed questionable, it was the ninth one, “Nature Is Over” (Walsh, 2012, pp. 82-85), that was most disturbing. The article takes an oddly triumphant tone to catalogue the scope and impact of human activities in leaving “a physical mark of our presence” on the earth. An atmospheric chemist is quoted as saying, “It’s no longer us against ‘Nature.’ Instead, it’s we who decide what nature is and what it will be,” a staggeringly naïve statement to make in the wake of the 2011 Japan earthquake and tsunami, to name one example. The article takes on a quasi-ecological tone toward the end, noting the possibility of a “flame out” for human beings.

Still, the article urges not caution, not stewardship, not humility, as Berry does, but technology and science and hubris on a planetary scale. It says the future will require “privileging cities,” as though cities are not currently privileged, “because dense urban developments turn out to be the most sustainable and efficient settlements on the planet,” although the author fails to explain how the residents of these efficient and sustainable urban developments will eat. The article boasts of “our ability to comprehend the full extent of the human impact on earth,” as though the concept of unintended consequences were unheard of. Then the article says, “And if we prove unable to quickly reduce greenhouse-gas emissions, we may be required to consciously fiddle with the climate through geoengineering, using artificial clouds or other planetary-scale technology to reduce the earth’s temperature directly.” It does not take much imagination to come up with a list of unintended global consequences. The author betrays his superstitious faith in science and technology, and his steadfast confidence in our ability to work error-free on a planetary scale, then dresses up the whole matter as inadvertent farce with the use of the verb “fiddle with.” I checked: this was not a lampoon issue of Time. The article reminded me that the world needs Wendell Berry, if only so he can remind us that “Nature is necessarily party to all our enterprises and that she imposes conditions of her own” (1990, p. 202).

The second thing that happened was a lecture on my campus by a medical researcher on the impact of air pollution on heart health. He explained how particulate matter in the air can affect people’s hearts, and that high smog alert days in Los Angeles, for example, correlate with increased instances of heart attack patients in emergency rooms. No surprise: pollution makes people sick. What surprised me was that in his hour-long talk he did not mention that reducing air pollution might be a solution to this health problem. Instead he ended his talk with an explanation of further research into the use of antioxidants to improve the health of lab animals subjected to unhealthy levels of particulate matter in the air. While such research may have many valuable applications even in a world with clean air, the researcher’s focus on it exemplifies several of the dangers of industrial thinking, including a deterministic acceptance of natural ruin in exchange for technological progress, an exclusive faith in science and technology to solve our problems, and the narrowing momentum of specialized research—all mindsets of modernity that smother hope and paralyze agency and all mindsets that Berry consistently decries. Again, it is clear the world needs Wendell Berry.

The third thing that happened in March 2012 was an appearance by Terry McAullife (2012, March 9) on Morning Joe. McAullife, now the governor of Virginia, was promoting GreenTech Automotive, an electric car company of which he was chairman. After talk about the car, McAuliffe, presumably a person interested in ecological issues, was asked about the Keystone Pipeline, the tar-sands oil pipeline proposed to run from the Montana-Canada border to the Gulf of Mexico. He answered, “If the map is drawn appropriately, where you don’t have to go into these environmentally sensitive areas, we can do this….Put the pipeline where it won’t cause any environmental issues…Let’s do it where we’ll get the oil but at the same time we’re not affecting pristine environmental areas.” This was accepted as an adequate answer. Even ignoring the damage of tar-sand oil refining or the impact on climate change in merely releasing such a giant carbon bomb—beyond those real worries, not one of the several guests and hosts on that television show asked, “What area is not environmentally sensitive?” or “Where would a pipeline break not cause any environmental issues?” or “Whose backyard do you want a tar-sand oil spill in?” The world needs Wendell Berry, who knows that “There are no unsacred places; / there are only sacred places / and desecrated places” (2005b, p. 18).

I mean no disrespect to the Time article author Bryan Walsh, the visiting scientist, Terry McAuliffe, or the people with Morning Joe. They are products of our time, our culture, and our education system. They have been schooled—as most of us have been—to ignore natural limits, to think globally, to operate within the confines of a professional specialty, to separate an end result from its means, to put their faith in science and technology for solutions to problems created by science and technology, to think of rural areas not as fragile and irreplaceable landscapes and watersheds, and certainly not as someone’s home, but rather as resources for urban areas to exploit whenever they need food, water, energy, fiber, a disposal site, a labor force or a consumer market.

Berry’s lessons, by contrast, offer the hope of attitudes, knowledge, and disciplines meant to ensure the health of the world and all the creatures in it, human and non-human. As he writes in The Unsettling of America (1977/1996): “The care of the earth is our most ancient and most worthy and, after all, our most pleasing responsibility. To cherish what remains of it, and to foster its renewal, is our only legitimate hope” (p. 14). Hope for Berry is nothing so whimsical as a choice—hope is our “duty” (1992/1993, p. 11), with all the gravity and urgency that duty implies. As we seek to carry out our duty of hope and awaken our agency for change, Berry cautions that the health of the world has to be our standard for good work, something that requires that we “find the humility and wisdom to accept nature as our teacher” (p. 11). And he instructs us that work is made good—is made hopeful—by faithfulness to the everyday disciplines because “Hope lives in the means, not the ends” (1970/2003, p. 125).

As an exemplar, as a teacher, as a voice of hope and a call to change, the world needs Wendell Berry.