Table of Contents: Place and Resilience in Sustainability Education, April 2016 [1] 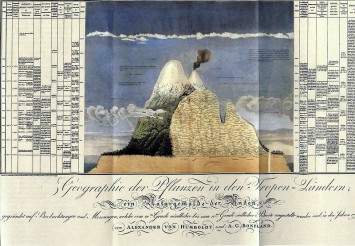 Ascending an Andean volcano in 1802, with feet bloodied by jagged rocks and fingers numbed by icy wind, Alexander von Humboldt paused to balance his barometer on a narrow ledge. At 19,413 feet, he knew none but his small party of explorers had ventured so high. Then a crystalline fog lifted, revealing an impassable crevasse, but also Mount Chimborazo in all its snow-domed glory. The thirty-two-year-old’s encompassing mind gazed at a South American mountain and toggled back to the Alps and Pyrenees, recalling all the plants and rocks he had collected, all the measurements he had recorded on other expeditions. At that moment, biographer Andrea Wulf writes, “Everything he had ever observed fell into place.” Humboldt from that day championed a unified view of nature, a “great chain of causes and effects,” he said, where “no single fact can be considered in isolation.”

Only Napoleon’s fame exceeded Humboldt’s in their era, yet in the succeeding centuries, the naturalist-adventurer has slipped into obscurity, at least in the English-speaking world. In her capacious new biography, The Invention of Nature: Alexander von Humboldt’s New World, Wulf seeks to restore Humboldt’s renown for scientific advances such as inventing isotherms, discovering the magnetic equator, and conceptualizing global climate zones. But even more, the biographer seeks to revive awareness of her subject’s revolutionary ideas. In previous books on the Age of Enlightenment, Wulf depicts a scientific milieu bent on collecting, naming, and dissecting, with botanists, geologists, and zoologists driven to dismantle nature piece by piece en route to understanding its machinery. The polymath Humboldt, in contrast, sought out troves of evidence from nature as a means to fathom its vast interconnectedness. “He saw the earth as one great living organism where everything was connected,” says Wulf, “conceiving a bold new vision of nature that still influences the way we understand the natural world.”

This holistic view has had profound implications for science and economics, individuals and society, which Wulf engrossingly explores throughout Humboldt’s long, intrepid life and also in the works of Darwin, Thoreau, and others shaped by his legacy. For sustainability educators, the warp in the author’s rich and illuminating tapestry may be how Humboldt’s concepts redefined the meaning of place. Though absent from most textbooks, his name remains prominent on maps, honored in towns and rivers, bays and mountain ranges, from the Humboldt current off the coast of Peru to the Mare Humboldtianum on the moon. If each human exists in relationship with people and places, if “Where am I?” is the first question posed by place-based curricula, investigating the ideas elucidated in Humboldt’s Personal Narrative (part of the 30-volume Travels to the Equinoctial Regions of South America) and 5-volume Cosmos: A Sketch of a Physical Description of the Universe will help us comprehend our own location in the physical world and, still more, the meaning we seek and find whenever we dwell intimately in one place.

Young Alexander’s connection with home was fraught from the outset. Born into the Prussian aristocracy in 1769, he grew up outside Berlin on an estate he sometimes called Schloss Langweil—“Castle of Boredom.” Ambitious parents engaged private tutors to administer a classical education, steeped in ancient languages, mythology, and abstract reason. But in the years David Sobel calls “the heart of childhood,” Alexander often escaped the classroom, to sketch and collect insects and plants in the semi-wild woods. Slight and often ill, he also spent long hours confined to bed, devouring the journals of Captain James Cook, who circumnavigated the globe, and dreaming of high seas and tropical paradises. Imagination, says Wulf, as much as outdoor experiences, sparked an unquenchable wanderlust, “an inexplicable pull towards the unknown—what the Germans call Fernweh–a longing for distant places.”

Yet pressured by his widowed mother, Humboldt in his early twenties deferred travel dreams for mining studies in Freiburg. Classmates stayed in the laboratory, but a conviction that knowledge requires direct experience pulled him underground, to assay subterranean vegetation and magnetism, and later innovate miner safety with improved equipment and training. His mother’s death in 1796 gave him the freedom and fortune to plan a voyage a la Captain Cook. It took years of methodical planning but, in 1799, with botanist Aimé Bonplande and 42 crates of scientific instruments, he set sail for South America.

Each place encountered held endless fascinations for both men. Their first exposure to tropical biodiversity, in a Spanish colony now part of Venezuela, nearly overwhelmed them; Humboldt wrote his brother that “we run around like fools” collecting specimens. Together the pair scaled Andean peaks, traversed the searing Los Llanos plains, and braved mosquitoes more voracious than crocodiles while paddling the Orinoco River. Every phenomenon warranted measurement, from the lethality of electric eels to the blueness of the sky. Everywhere too Humboldt filled notebooks about pre-Columbian tribes and the horrors of colonialism. “Unlike most Europeans,” writes Wulf, “Humboldt did not regard the indigenous people as barbaric, but instead was captivated by their culture, beliefs and languages.”

Such close observations of people directly dependent on place may have inspired a key insight: humans too belong in the web of life. The abundance of tropical flora and fauna shrank humanity’s perceived significance until, he wrote, compared with nature’s magnificence, “man is nothing.” Yet his travels also revealed how humans can disrupt the fragile web. At Lake Valencia, he relentlessly investigated local tales of dropping water levels, and finally determined that forest clearing as well as water diversions for irrigation were to blame. Again and again in the Americas and later Europe and Russia, he documented that deforestation altered water cycles, dried soils, and heated the local climate. “Everything,” he wrote, “is interaction and reciprocal.” If society persists in overexploiting forests, grasslands, and fisheries, warned Humboldt, the consequences will be grave.

In his prescience to link human activities and climate change, says Wulf, “he unwittingly became the father of the environmental movement.” Once the web of life is recognized, “its vulnerability also becomes obvious.” Diary entries suggest yet another fertile shift in his thinking in Venezuela, when unfamiliar southern constellations manifested the distance to Germany and surprised him with yearning for the family Schloss. He began to realize that feelings, as well as his prodigious factual recall, shaped his relationship with nature and place.  As he trekked through South America, sailed to Cuba and Mexico, and dined in Jefferson’s White House, he increasingly recognized the role of emotion in human perceptions of reality. “Memories and emotional responses,” explains Wulf, “would always form part of man’s experience and understanding of nature.” In decades to come, from his chosen home in cosmopolitan Paris, Humboldt wrote and lectured against the prevailing “microscopic” view of objective science. In his embrace of the subjective, says Wulf, the great scientist re-defined nature as “dynamic, organic and thumping with life.”

Almost half of The Invention of Nature is devoted to the dissemination of Humboldt’s ideas, by their creator through books, lectures, and persona suasion, and by two centuries of disciples, witting and unwitting. Charles Darwin may have been the scientist most cognizant of debts owed to his elder. Personal Narrative stirred Darwin’s own wanderlust, accompanied him on the Beagle, and served as a lens focusing his own observations. Darwin’s Beagle journal proclaims that Humboldt “like another Sun illumines everything I behold.”

Similarly, reading Cosmos set John Muir off on a 1,000 mile botanizing walk in 1867; later, from the Sierras, his most famous utterance could be Humboldt’s: “When we try to pick out anything by itself, we find it hitched to everything else in the universe.” And young zoologist Ernst Haekel requested Humbolt’s books for Christmas and made a pilgrimage to the family estate. Enraptured with Humboldt’s vision of a teeming but unified nature, Haekel coined a term for an emerging science—ecology—from oikos, a Greek word for household. Wulf elucidates Haekel’s meaning: “All the earth’s organisms belonged together like a family occupying a dwelling and like the members of a household they could conflict with, or assist, one another.”

Literary writers have also absorbed and responded to Humboldt’s ideas. Wordsworth and Coleridge insisted that poets, like scientists, must get outside to do their work. Perhaps the most generous poem in Whitman’s Leaves of Grass is called “Kosmos,” and Poe’s transcendental prose poem, “Eureka,” was dedicated to Alexander von Humboldt. Like Cosmos, “Eureka” attempts to discern the intricate complexity of objective and subjective existence. Humboldt would surely have agreed with Poe’s contention that the universe is “the most sublime of poems.”

Similarities between Humbdolt’s and Thoreaus’s viewpoints were spotted by Ralph Waldo Emerson (another Humboldt admirer). Four decades after Humboldt stuffed specimen-trunks in South American rainforests, Thoreau was infamous in his Massachusetts hometown for recording pond water temperatures, snow depths, and the arrival dates of birds. Emerson wrote of his friend, “Every fact lay in glory in his mind, a type of the order and beauty of the whole.” According to Wulf, ideas set forth in Cosmos set Thoreau free to write Walden, convincing him to translate intimate knowledge of Concord’s woods into poetic prose.

Yet the later book is no mere homage but a recasting of shared ideals. Thoreau challenges Humboldt’s peripatetic approach to self-knowledge, explaining in his journal, “Only that traveling is good which reveals to me the value of home and enables me to enjoy it better.“ To travel widely as Humboldt did, says Thoreau, limits discoveries to the superficial, while rooting in place develops deep understanding through time and evolving connections. For Thoreau at least, Humboldt reinvented the idea of home, setting everyone free from wandering by fixing each within the context of a unified natural world. In Thoreau’s industrializing Concord as in the 21st Century, the task before each of us is to resist disconnection from material and spiritual presence, but instead to dwell deliberately in our own precious place. Wrote Thoreau, “Men should not go to New Zealand to write or think of Greece and Rome, . . . . New earths, new themes expect us. Celebrate not the Garden of Eden, but your own. “

Revolutionary Simón Bolívar too was shaped and empowered by the explorer and his writings. Humboldt met the young Brazilian soon after his return to Europe, and spun tales to the homesick 21-year-old about South America’s natural wonders amidst oppressions by colonial overlords. Decades later, Bolívar wrote to thank his old friend for awakening a continent-wide pride of place that inspired thousands to revolt. But Humboldt himself spent his final years in a place he detested, forced by dwindling fortunes to serve the Prussian King in Berlin. Careful readers of Wulf’s sweeping and eloquent biography will feel assured that his precise location would have troubled the aging adventurer little. Imagination could have carried him at last to Chimborazo’s summit, and Humboldt knew himself to be part of a wondrous whole.