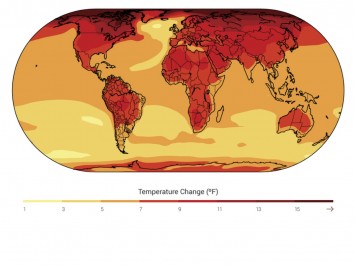 Computer model projections of the Representative Concentration Pathway scenario of 8.5 watts per meter squared (RCP 8.5) from the National Climate Assessment

Abstract: Energy education, vital though it is, remains incomplete if it doesn’t explicitly address the impacts of human activities, specifically the combustion of buried solar energy/fossil fuels, on the environment in general and climate system in particular. Projections based on current emission trends indicate a likely increase of the radiative forcing of energy in the Earth system from around three waters per meter squared today to over eight by the year 2100, substantially heating the planet in the process. Efforts to avoid or minimize the connection between human energy consumption and changing climate amount to a form of science denial through omission. In order to address the causes, effects, and risks of climate change and appreciate the range of options to minimize negative impacts and maximize resilience, energy and climate literacy efforts should be combined and ideally infused throughout the curriculum.

In his 2014 book “The Energy-Climate Continuum,” Antoine Bret (2014) notes that on the timescale of humanity—which itself is merely a blip in the cosmic timeline—the current era of fossil fuels will encompass only a few hundred years. Admitting we still have ample reserves of gas, coal and oil now, he asks: “Can we thus quietly search energy alternatives while burning every single gram of fossil resources? No, because of this famous “climate change.”‘ Noting that burning fossil fuels has already significantly heated the planet, Bret observes that climate scientists warn “burning all of the available fossil fuels would result in tremendous global warming” (p. 3).

Energy education, vital though it is for preparing learners for making informed energy decisions, is inherently flawed unless climate change—and specifically the link between human activities and the changing climate—is an organizing principle of the overall scope and sequence of the curriculum or pedagogy. Yet too often, energy education, even well intended programs that emphasize energy efficiency and renewable sources of energy, skip, skim, or skirt how human activities are affecting the climate system. The reasons for this omission, whether overt or unintentional, are understandable given our legacy of polarized politics around climate change and fossil fuels in the United States.

Wanting to avoid controversy, educators may opt to downplay the scientific consensus in favor of emphasizing the positive potential of “clean energy.” In this way, the gloom and doom, psychological conundrums, and outright messy political climate of climate change can be avoided. To most that probably seems not only reasonable, but also smart. But however understandable, such strategies are pedagogically suspect, ethically amiss, and amount to a form of denial of the science that is enormously problematic for society, contributing to the current climate of confusion about the human role in current climate changes.

For energy education to address the challenges of the 21st century, climate change must be addressed, and within that discussion, the impacts of the fossil fuel era on the natural greenhouse effect must be integral and emphatic. The all-too common practice of skipping over or avoiding these topics has contributed substantially to our current climate of confusion and energy illiteracy.

Nearly a decade ago climate education was at low ebb and energy education was in a similar boat. There was essentially no federal funding for developing curriculum or teacher professional development to help young people understand climate in general and human-induced climate change in particular. By and large the same was true for energy education.

True, programs such as the National Energy Education Development Project (NEED), which has been around since 1980, may mention climate change somewhere in the materials, just as major energy companies may acknowledge that burning fossil fuels is contributing to the heating of the planet somewhere on their website or in their annual report. But the message isn’t one of urgency. Rather, it maintains, intended or not, the business as usual status quo false balance: “Yes, we have both renewable and non-renewable energy, and both have their pluses and minuses…. but non-renewables rule now and for the foreseeable future.”

Given the lack of support for basic energy and climate education, it is no wonder that most American adults and teens fail quizzes on climate and energy basics. Intent on improving our collective understanding of these topics, a number of us, inspired by the Ocean Literacy framework developed by NOAA, National Geographic and others, began discussing the possibility of drafting a similar framework for climate science about a year ago.

But the lack of funding for such an endeavor meant we had to bootstrap our efforts. So we got creative, finding some funds to host a number of small workshops, releasing an initial version in 2008, and then a more carefully vetted document endorsed by the US Global Change Research Program at the National Science Teachers Association meeting in 2009: Climate Literacy: Essential Principles of Climate Science.

The Climate Literacy document helped set the stage for Congressionally authorized federal grants in 2009 for climate change education, which in turn funded the development of curricular materials and professional development programs for teachers. Our success in pulling some financial support from congress ended a funding-drought that went back to the late 1990s.

While Climate Literacy focuses on climate in general, its Guiding Principle for Informed Climate Decisions emphasizes that “Humans can take actions to reduce climate change and its impacts.” As most of the specific actions covered are energy-related (for obvious reasons), we began pestering the Department of Energy to take the lead in developing a similar framework to identify the essential principles and fundamental concepts of energy.

The process of developing and vetting the principles and concepts was similar to the development of the climate literacy effort, with hundreds of experts weighing in, including principals of the US Global Change Research Program and the White House Office of Science and Technology Policy. Defining energy literacy as “an understanding of the nature and role of energy in the universe and in our lives…. [and] the ability to apply this understanding to answer questions and solve problems,” the Energy Literacy framework was released in 2012.

But curiously the document does not directly address climate change, touching only briefly on greenhouse gases as they relate to the Earth’s climate, and mentioning almost in passing that “energy decisions have environmental consequences.” Many of us were disappointed that clear dots were not connected, but we were philosophical: it was a good start. Spanning the sciences and technology, it got a much-needed conversation going on energy access and equity issues, including intergenerational responsibility and quality of life. While climate change is conspicuously missing from the principles, it looms large over the entire framework.

Lacking a combined Energy-Climate Literacy framework, we ultimately have to combine the two on our own. Fortunately, the two literacy frameworks are complementary and overlap substantially, particularly around the role of energy from the Sun driving many of the processes, including climate and biosphere of the Earth System. And both are explicit about how the principles can help foster informed decision-making and actions.

Promoting an “energy conscious and educated society” is not sufficient if it doesn’t explicitly include climate change science and solutions as a central theme of the pedagogy. A false balance between renewables and non-renewables is problematic in the extreme, particularly if it is aided and abetted by vested interests intent on maintaining business as usual.

Fortunately, there are excellent resources available for educators to weave climate and energy learning together in ways that are synergistic and complementary. The Next Generation Science Standards include energy and matter as crosscutting themes, and the basics of climate and the environment—and how we can minimize negative human impacts—are established in elementary grades and then further expanded upon in middle and high school. The Climate Literacy and Energy Awareness Network (CLEAN- http://cleanet.org), through funding from the National Science Foundation and NOAA, has developed a digital library pointing to over 500 high quality online learning activities, videos, and visualizations that help educators and learners connect the dots between climate and energy issues.

Climate and energy can and should be taught throughout the grade levels, first building a foundation of inquiry and problem-solving skills based on observations and analysis, then expanding the scope and depth beyond the local and immediate into the more national and global, longer-term scales. The water cycle, the carbon cycle, and the basic mechanism of the greenhouse effect (which is missing from the Next Generation Science Standards) all should be integral to science education, yet today all too often they are taught in disjointed, technical terms that have little or no relevance to learners.

Most importantly, these vital topics must be woven throughout the curriculum—not only in science classes, but also in mathematics, social studies, civics, arts, and humanities. A tall order? Yes, but this is already starting to occur on a small scale. There are examples of ad hoc efforts of a single individual or small group of motivated educators who feel the urgency and calling to do everything they can to prepare young people for the daunting challenges we—and future generations—face.

The Alliance for Climate Education’s high school assemblies, which have been shown to successfully increase students’ knowledge of how climate and energy are linked, have inspired thousands of students to get involved with developing their own problem-solving projects. A number of schools and even entire school districts in Virginia, Colorado, California and elsewhere are being transformed into inspiring, engaging living laboratories by adding solar energy, tracking and conserving energy throughout the school, and infusing climate and sustainability throughout the curriculum. The Girl Scouts even have a Climate Connections badge that emphasizes the connections between climate change and human activities, encouraging actions to reduce negative impacts.

If carbon emissions continue to increase at their current rates, we are well on our way to not just a warmer but full-blown, hotter world. Today scientists who study the Earth’s energy budget estimate we have increased direct radiative forcing of around three watts per meter squared since 1750 (Butler 2014), primarily due to increased heat-trapping gas concentrations from burning fossil fuels. We are on track now to further amplify the heating of the Earth system by over eight watts per meter squared by 2100. The implications of this increased concentration of energy and heat, which will profoundly alter ecosystems and society, is indicated in the “red hot” images of the “business as usual” scenarios found in reports such as the Intergovernmental Panel on Climate Change (IPCC 2013) and the National Climate Assessment (Melillo 2014). To flatten our trajectory and stabilize at around the same level of warming we have now will require massive transformation of our energy infrastructure and attitudes, and such profound change can only occur through education and informed action.

A lukewarm or red-hot world? This is a matter of not just sustainability but survivability. If we are going to prepare ourselves and future generations for the known and unknown changes heading our way, coupled energy-climate education is imperative.

Bret, A. (2014). The Energy-Climate Continuum: Lessons from Basic Science and History. Springer. P. 3.