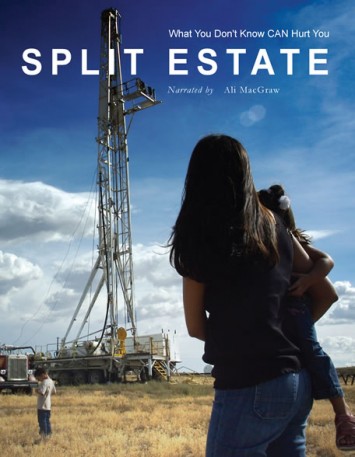 Those who believe natural gas is a clean source of energy really need to see Split Estates.   Most commodities produced in our postmodern, global, corporate, capitalist economy are consumed without knowledge of where they come from, knowledge of the people who produced them, or knowledge of the negative consequences to local people and their environment.  Like all contemporary commodity production, natural gas comes into our houses with a similar, undisclosed story about its effects on people and our environment.  Split Estates is a must see documentary that tells the story of the consequences of natural gas production to people, water, and land.

States, like Colorado, have required Surface Use Agreements, which require that the surface owner and subsurface mineral rights owner negotiate over well placement, roads, and pipelines.  If no agreement is reached, then the industry can post a bond with the state and begin drilling where they see fit.   Split Estates examines various split estate conflicts as they have affected numerous ranching families throughout the rocky mountain west.   There is one example from the film that details the actual removal of a family cemetery without the surface owner’s knowledge.

The more insidious side of the clean natural gas myth is the production process of extracting natural gas from the various geological formations.   Most of the methane gas in the West is found in coalbed reservoirs.  The process of extracting the methane gas from the coalbed reservoirs requires a technology known in the oil and gas industry as hydraulic fracturing.  Hydraulic fracturing involves using high-pressure injection of water, sand, and various chemicals into geological formations, fracturing them in such away as to allow the gas to escape via the fracture, which is held open by the sand.  One of the main concerns with this process is the potential to contaminate underground drinking water.  Split Estates reveals that many of the chemicals used in this process are known to have serious health effects, including cancer, eye and skin irritation, respiratory problems, internal organ problems and reproductive disorders.   According to one source in the documentary, of the 200 known substances used in the hydraulic fracturing process in Colorado, 90% of them contain chemicals known to have adverse health effects recognized by the EPA.  Industry denies that the hydraulic fracturing chemicals are dangerous but refuses to release the chemical composition of their hydraulic fracturing fluids claiming this information to be proprietary.

Split Estates examines several families that have been exposed to hydraulic fracturing chemicals when inhaling fumes from well explosions or inhaling vapors from large evaporation ponds containing injection water inundated with hydraulic fracturing chemicals.  The film also provides examples of people being told by state environmental authorities that the newly discovered methane in their water was safe provided they left a window open to ventilate their house.   There are examples of domestic wells that became contaminated with methane that people chose not to drink from but that they did use for bathing.  There are personal stories of people developing tumors and stories of healthy people becoming extremely ill with neurological disorders linked directly to the types of chemicals used in the hydraulic fracturing process.  There are examples of the gas industry making settlements with people to help pay medical bills and compensate for land devaluation that has occurred due to contamination.  Once the industry makes legal settlements with victims, the victims are forbidden from ever disclosing what the industry did to them and their property. There are disturbing images of flammable gas bubbles coming out of a local stream immediately after the hydraulic fracturing of a gas well on a surface owner’s property.  There is also video coverage of an exploding gas well just 250 feet from a landowner’s residence.  After listening to real people tell their stories about the extraction of methane gas, it begins to look less like the clean fuel we have been led to believe through the industry’s multi-million dollar ad campaigns extolling the virtues of burning clean natural gas.

What makes the “clean” gas industry even more suspect is the behind-the- scenes exemptions they have received from U.S. environmental law.  As noted above, hydraulic fracturing chemicals are deemed by the industry as proprietary secrets and have been recognized by our federal government as such.   Vice President Dick Cheney, who was the former CEO of Halliburton, one of the industry’s largest oil and gas extractors, has been instrumental in influencing these environmental law exemptions through the shaping of the 2005 energy bill. According to Split Estates, the oil and gas industry is exempted from various sections of the Clean Water Act, Safe Drinking Water Act, Clean Air Act, Resource Conservation and Recovery Act, CERCLA (commonly known as Superfund), and is not included in the Planning and Community Right-to-Know Act (EPCRA).

Split Estates is a well made documentary and very important for several reasons.  First, as natural gas supplies begin to dwindle globally, special attention is being focused on the Rocky Mountain States to supplement global supplies through increased development of this resource in some of our most pristine landbases.   Secondly, this surge of natural gas development in the West, like in other areas of the world, is occurring in well established communities, where people have been making a living through ranching and farming, activities that requires a stable and healthy supply of water.  Third, there is no such thing as a clean fossil fuel; they all emit carbon dioxide, a greenhouse gas, and require an extraction process, which entails transformations in the landbase, thereby affecting the environments of human and nonhuman life.  Lastly, the deeper moral message in this film implores us to take action toward developing more sustainable energy alternatives.   We need a paradigm transformation in the way we conceptualize energy, and we need to start designing our culture’s future free from reliance on fossil fuel energy.