In 1968, Lewis Mumford gave an address at a symposium, “Challenge for Survival” sponsored by The Rockefeller University and The New York Botanical Garden. The address admonished modern life for abandoning a more sustainable way of living that would embrace a “close symbiotic partnership” between human beings and the plant world:
As long as from seventy to ninety per cent of the world’s population was engaged in cultivating plants, human life as a whole was secure. In the past century this biological factor of safety has shrunk. Tomorrow it may be gone. If our leaders were sufficiently awake to these dangers they would plan not for urbanization but for ruralization (Mumford, 1973).
At the center of Mumford’s critique was the “machine-centered civilization” that devoured the environment and enslaved humankind. For Mumford the modern machine was suicidal and reckless, and the wheels of production, consumption, and shameless greed would be our undoing. Its ideological promise of salvation would be our damnation. Our lives, he argued, would be “dreary and useless,“ and the “planet unfit for supporting life.” 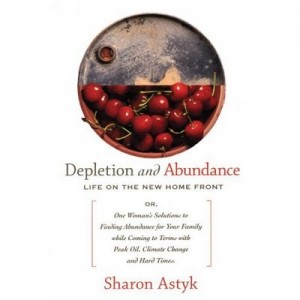 [1]
Mumford urged us to reject this “anti-organic regimen” because it has little faith in life or love.  We must begin from the beginning, he argued. Segregation and isolation must be replaced by resurrecting communities of intimacy with nature and each other. Even urban centers must reintroduce the plant and agricultural world it destroyed by supporting citizen inspired neighborhoods that envision more self-sufficiency and collective concern. Mumford’s sense of urgency is deeply shared by Sharon Astyk in her book, Depletion and Abundance: Life on the Home Front or One Woman’s Solutions to Finding Abundance for Your Family while Coming to Terms with Peak Oil, Climate Change and Hard Times. For Astyk, the debate is over. Peak oil, or the end of cheap oil, climate change and a scaled-down industrial economy form the landscape of our lives for the foreseeable future. These things form the bedrock from which we must forge our future. For Mumford in 1968, all things were possible if only we would choose it.  For Astyk, not all things are possible but we still have choices.
It may be the supreme irony of our time that abundance has encouraged selfishness and that scarcity may become the catalyst for a new covenant of cooperation. While cheap and abundant oil has fueled economic growth, the momentum toward oil depletion means much higher prices with the consequence of permanent economic slowdown. We will never again live as we did.  For Astyk, the acceptance of peak oil is the beginning of our, as she puts it, “newfound freedom.” Anthropogenic or human made climate change, with its new constellations of drought and flood along with increased opportunities for catastrophic storms, is a reality that she acknowledges.  An ice-free Artic by 2013 could very well raise ocean levels one meter which would flood many major American cities and coastal areas. Better to prepare for hard times than be unprepared if it never gets better.  For Astyk, it’s a matter of asking oneself, “what happens if I do?” and “what happens if I don’t?”

Astyk argues that it’s time to get out the boats. The personal is the political, she says. Don’t wait for the politicians to save us. They’re in the pockets of corporations until we get publically financed national elections. We learned a hard and bitter lesson about government and the abandonment of the Lower Ninth Ward in the aftermath of Hurricane Katrina. It’s time, she says, to act on our own. Don’t wait for magical technological fixes. It’s time to watch each other’s back by starting to build real communities. Helping and encouraging each other to be self-sufficient must become the basis for a new culture. Living with limits won’t be easy. Downscaling will be the norm. Smaller houses with vegetable gardens and no lawn will be the new vogue. Intergenerational families will gain currency.  Careers will morph into part-time work by choice and reality, allowing more time for home and community food production and preservation, fixing stuff, and encouraging family and neighborhood social life (Astyk is a former academic, raises food, teaches her children subsistence skills, and fixes things at home, and her husband farms, home schools the children and teaches part-time).  What used to be called “women’s work” or “home economics” will and must gain respectability and appreciation. Astyk notes that women have “historically inhabited the space of private life where food, clothing, cooking and childrearing were the work of women, and that men inhabited “public life — the world of economics and politics and other ‘important things.” Women’s work was devalued and still is. Many still believe that the clarion call for change in light of the serious challenges we face today are only resolvable in the big public arena of government and economy, in the world of men. This devaluation of domestic work and the private life of women, she argues, perpetuates the belief that “private actions have minimal public consequences.” Yet, she admonishes, it is women and “women’s work” that will spearhead real change, and the subsistence economy or “informal economy” as opposed to the formal or official economy (“where the rich of the world live”) will take on increasing importance as a source of sustenance in our everyday lives.
Like Vandana Shiva (2000), Astyk argues that food security will be the central issue of this century. The infrastructure of modern industrial agriculture is in danger of collapse. The political economy of the green revolution, which was dependent on cheap and abundant oil and natural gas and mammoth corporate farms is unsustainable.  She argues that “our current access to food is based on theft of soil and water.” One half of the water in the United States goes to agriculture and 90% of it is used to produce food for corporate livestock. For every calorie of food we eat, we use one liter of water. We have lost well over one half of our topsoil in a half century because of modern straight line farming and the disuse of traditional wind breaks. Moving towards food security will require, Astyk states, that one third of all Americans engage in some kind of food production.
Real sustainability in the near future will require us to live in what Astyk calls “cultures of permanence. “Staying put, fixing what is broken, and living local and seasonal lives will constitute our new way of living. It is, she argues, “in the kitchen and garden where we are most connected to our fellow human beings and in the kitchen, we will change the world.” Peak oil and climate change demand that we show our true integrity.  Astyk ends her timely book by calling out “what would happen if we had the courage of our convictions and stood up and said, ‘I will no longer steal from the future and the poor. I will live only on what is mine by right and in justice.’” Modernity has managed to complicate our lives, estrange us from each other and separate us from nature. Astyk has written a wise and thoughtful book filled with optimism and passion for a future that is anchored in realism, if only we would embrace it.