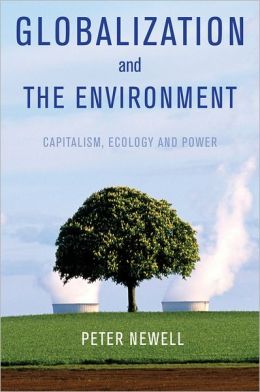 Review of Globalization and the Environment: Capitalism, Ecology and Power, by Peter Newell

Peter Newell’s Globalization and the Environment is a well-argued, extensively researched exploration of the relationships between globalization and pervasive environmental and social destruction. Newell seeks to offer a “contemporary, coherent, critical analysis of the way in which the relationship between globalization and the environment is being governed: by whom, for whom, and with what social and ecological implications” (p. 13). His work responds to some of the most pressing questions of current times with regard to sustainability: “Is the current organization of the global economy compatible with the pursuit of sustainable development? Are we capable of securing the planet’s future with the economic and political institutions we currently have at our disposal? What forms of governance and collective action are possible in a context of globalization? Can the undoubted wealth which globalization generates (for some) be steered towards more equitable and sustainable forms of development (for all), or is the very idea of sustainable development in a context of globalization an oxymoron?” (pp. 2-3).

In responding to these questions, Newell emphasizes that globalization, rather than being an autonomous process beyond human control, is in fact a system “driven by deliberate actions and non-actions on the part of states, international organizations and the private actors that they often serve” (p. 4). For Newell, globalization is “first and foremost a political process” (p. 4). His exploration focuses on trade, production, and finance as key drivers of globalization, arguing that “patterns of production, trade and flows of finance, and their governance and un-governance by a growing range of actors … are most central to the interface between globalization and ecology” (p. 7).

Newell’s approach to exploring the relationships among globalization, formal politics, political influence, and environmental damage is oriented toward transformative praxis that is rooted, in part, in critical political economy and historicism. Newell emphasizes that globalization is a phenomenon that has emerged from particular historical and political forces and circumstances. In conceptualizing globalization as a product of historical agents and circumstances, he draws attention to the people, institutions, and powerful interests that organize and perpetuate the system. In so doing, he seeks openings for reform and political/economic transformation.

Globalization and the Environment begins with an exploration of the concept of political ecology, exploring the social relationships that influence environmental change within the context of globalization. Newell follows this exploration with a well-developed theoretical account of environmental governance in the globalized world. This account addresses the questions of who governs with regard to environmental change and for what/whose purposes. It also addresses the socio-ecological and political implications of efforts undertaken by diverse entities to influence the behavior of the global agents and shape and trajectory of globalization. This theoretical foundation is followed by the author’s in-depth exploration of the relationships between environmental change and processes of globalized trade, production, and finance. Newell presents a wealth of detail about the political ecology and governance of these relationships, as well as about those who contest harms done in the name of globalization.

Newell’s approach defies the ideological naturalization of globalization that characterizes it as an inevitable, natural evolution of human societies. He also questions the notion that the governing power of states has been neutralized within the globalized regime. Instead, Newell recognizes states as 1) key actors in developing and maintaining political and economic structures that underpin globalization and 2) influential non-actors that may strategically stand aside in face of globalization’s forward movement. Newell argues that politicians and states play central roles in advancing the cultural hegemony that supports the interests of entrenched and powerful interests, in part, by rendering opposition to these interests as seemingly beyond the realm of the politically possible. In so doing, he questions the notion that state power has been entirely and permanently eclipsed by powerful non-state agents. As he develops this argument, Newell demystifies the market as a purportedly monolithic and autonomous agent of global change and shines light upon the power relationships that inform state action and non-action.

In his exploration of trade, production, and finance within the context of globalization, Newell also broadens the concept of governance to encompass the actions of non-state entities and movements that contest and, on occasion, successfully influence practice. We see, for example, how corporations responding to voluntary certification schemes (such as those administered by the Forestry and Marine Fisheries Councils) as well as protesters disrupting free trade negotiations influence the processes and impacts of globalized production and trade. By expanding our view of what constitutes governance in the globalized world, Newell points to many openings for transformative action in support of a healthy environment and social justice. Still, Newell concludes that governance of globalization continues to be much further reaching and effective when it “takes the form of regulation for business” rather than regulation of business. This tendency, according to Newell, flows in part from the neoliberal paradigm that dominates the thinking of key social and economic actors.

Following his extensive exploration of governance and practice in the realms of globalized trade, production, and finance, Newell concludes that narrowing our view of what constitutes environmental politics to include only the processes of developing international agreements and laws reflects a limited and distorted view of the drivers behind extensive and continued environmental damage. Newell points to “the importance of connecting particular (political) ecologies to the circuits of capital and political power which produce them, without losing sight of what makes ecologies and social relations different in particular locales” (p. 158). In view of the need to reverse environmental damage where possible and promote healthy socio-ecologies, Newell calls for a democratization of global decision making. He also calls for widespread mobilization of diverse publics around a well-informed understanding of the processes and impacts of globalization.

Globalization and the Environment is a praxiologically-orientated exploration of the complex nature of globalization and the key processes of trade, production, and finance that characterize it. It offers readers a richly detailed, yet clearly articulated, foundation for both understanding and working to transform globalization as one of the defining systems of current socio-ecology. The combination of in-depth empirical investigation, effective theoretical framing, and an orientation to action that Newell achieves is rarely seen in academic texts that treat the complex phenomenon of globalization.