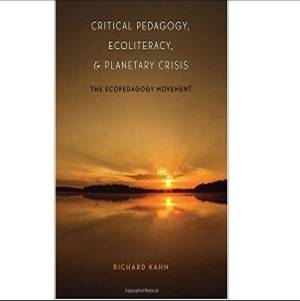 I begin this review by remembering Paulo Freire and Myles Horton’s great text, We make the road by walking (Horton & Freire, 1990), where Paulo Freire engages Myles Horton in what he called a “spoken book.” The text is comprised of a conversation between these two gentlemen as they delve into the complexities of education as, among many things, experiential, a popular movement for change, and inherently political in nature. The text had no formal a priori structure; instead, Freire suggests that he and Horton would “make the road by walking.” That is, they would make their way through their spoken book as topics evolved out of the already existing conversation.

But the title is also suggestive of another interpretation. One that suggests that to make the road, one must physically do something; one must actively engage in the process of walking the path. Then, one must constantly reflect on that path to ensure both its pedagogical stability as well as its adaptability to both theory and practice in one’s own life as these experiences are lived.

I use Paulo Freire to introduce my critique of Richard Kahn’s Critical Pedagogy, Ecoliteracy, & Planetary Crisis (2010) for two reasons. The first is that the ecopedagogy movement illustrated by Kahn stems from a path Freire began traveling before his untimely demise. The second is that Freire and Horton, as well as Kahn, believe that true liberation involves active participation through the educational process. This is not to suggest that Kahn’s Freirian foundation is the only framework depicted in his interpretation. Such a one-sided critique would have left Freire highly unimpressed. Rather, it is Kahn’s placement of the ecopedagogy movement in a series of contradictions that calls for a “dialogue amongst various sustainability movements” (2010, p. 57) which makes his interpretation compelling.

Kahn situates his argument regarding ecopedagogy within the context of unsustainable practices such as the over-reliance on nonrenewable resources, the over-development of land for short-term crop gain, and the profound effect globalization is having on the Earth’s diverse population of species. Kahn’s critique of environmental education as situated within a cycle of power defined by the “dominant social structure” had me fearing that I was about to engage in yet another context of blame. While notions of blame definitely have their place in critiquing the world, I was hard-pressed to engage in yet another argument that identifies the ecological calamities without at least offering a pathway out of the darkness.

It is here that Kahn defines the ecopedagogy movement as one that “opposes the globalization of neoliberalism and imperialism…and attempts to foment collective ecoliteracy and realize culturally relevant forms of knowledge grounded in normative concepts such as sustainability, planetarity, and biophilia” (2010, p. 18). For Kahn, ecopedagogy is about sustaining acts of resistance against dominant structures of power as an educational praxis. This praxis involves a critical dialectical engagement with both the benefits and the costs of living an unsustainable life as well as with the hidden curricula that perpetuate our social realities as well.

Kahn’s description is important in that, as we speak, these dominant forms of power are attempting to greenwash the term “sustainability” as one that works in conjunction with capitalistic endeavors. For this reason, Kahn’s reliance on the contradiction within the various sects of the ecological debate acts as both mimesis of the contradictions found in nature and also a form of resistance to the blind allegiance to a cause that does not critique its own costs. Working through these contradictions, Kahn ultimately contends that collaboration for the good of the planetary citizen may evolve into a meaningful interpretation of sustainability.

Kahn situates these contradictions in a series of cosmological, technopolitical, and organizational transformations. The cosmological transformation focuses on a genealogical reading centered on “paideia,” in part as a foundation for what he terms “progressive pedagogy.”   At the same time, Kahn sees “paidia” as being problematic when seen as a cosmology that questions who in the past and present conditions continue to be left out of the humanistic journey. Kahn accomplishes this task by reimagining the notion of the “human subject” as defined by themselves, resisting the urge to unify the many into a collective force, but as an effort to identify those shared aspects of living that all of humanity possess.

To further demonstrate this potential manipulation, Kahn eases us into technological transformation as one that can enhance issues of sustainability. He states:

we must be critically vigilant, always striving to practice critique and self-criticism, putting in question our assumptions, discourses, and practices about contemporary technologies, as we seek to develop multiple technoliteracies and an ecopedagogy of resistance (2010, p. 77).

This is not to suggest that we dwell in the negative possibilities that technology possesses in the form of inequity and class discrimination, but that we identify how potential uses for this technology can overcome these inequities. Kahn’s usage of literacy builds on the ideas promulgated by Fritjof Capra’s theory that “looks at the world in terms of the interrelatedness and interdependence of all phenomena (1982, p. 43). The presence of technology cannot be isolated from its impact on the world, or from the social conditions practices that give rise to it. To do so would undermine the critical engagement needed to critique its own existence as it pertains to the entire system of living and would, in effect, create illiteracy amongst its citizenry.

Kahn critiques an academy intent on housing sustainability under the auspices of environmental science while ignoring the social implications of the term. He rather envisions collaboration between the sciences and what he terms “traditional ecological knowledge” stemming from indigenous cultures’ ability to sustain themselves for generations. Kahn feels certain these cultures offer ever-evolving forms of knowledge that may enhance life for all populations. He contends that if these traditional forms of knowing were taught as science proper, then the educational process of learning/knowing and acting/reflecting would become both diverse and transformational.

Furthering the call for ecopedagogy to sustain acts of resistance, Kahn employs the writings of Herbert Marcuse and his belief that “education and revolution were largely synonymous forces, which struggled against their reified forms as one-dimensionalizing political apparatuses, corrupting professions, and dehumanizing cultural forms” (2010, p. 137-138). Kahn contends that Marcuse’s social and political critiques were interrelated to ecology in that Marcuse perceived education to be the liberating force that would thrust us back into the nature that power structures sought to remove us from.

Marcuse questioned whether nature and reality could even be considered a “cosmos” since scientific methodology had reduced the object/subject into that which is defined by the organization (i.e. administration) through its transformation of the natural world into a technical one (1989). Kahn draws upon Marcuse’s image of the one-dimensional man, arguing that this reduction had to occur in order for the substance of that reality to be signified by the “one-dimensional context of efficient, theoretical, and practical operations” (Marcuse, 1989, p. 123).

Kahn’s usage of transformations such as cosmological, technological, and organizational further reflect the writings of Marcuse who tells us, “there is a control over man which is repressive, and there is a control over man which is liberating” (1989, p. 127). This liberation, for Kahn, stems from actively participating in dialogue as an act of resistance in that the dialogue is never concluded. For emancipatory education to occur, one must be willing to speak and to listen, to act and to reflect. One must be willing to do something about the dominant forms of production and its relation to ecology, and to always question whether these forms of production are, in fact, sustainable.

I have based my critique of Kahn’s ecopedagogy in theory. But as Freire would claim, there always exists a relationship between theory and practice. In practice, I share Kahn’s concerns regarding the potential misuse of technology. And I applaud his effort to juxtapose Freire with Ivan Illich’s notion of tools as convivial forms of technology, for this collaboration lends itself to a viewpoint relevant to the practicing teacher. While Kahn primarily focuses his own analysis on how sustainability is being reconstructed in a movement-based context and in higher education, his call for transformation is quite relevant for the K-12 setting. Kahn tells us of Illich’s belief that “tools turn from being ‘means to ends’ into the ends themselves, and they thus alter the social, natural, and psychological environments in which they arise” (2010, p. 95). Herein lays the greatest need for an ecopedagogy movement.

In today’s era of standardized testing, the tool of “the test” has evolved into the means and the end. No longer are students being asked to think critically. Instead, schools favor the reduction of meaningful lessons for much-needed time to meet the demands as prescribed by No Child Left Behind. As a middle-school teacher for twelve years, I have witnessed this reductionist view of education on many occasions. Kahn, like Illich, believes that what is needed is a “reconstruction of education to serve the needs of varied communities, to promote democracy and social justice, and to redefine learning and work to promote creativity, community, and ecological balance between people and the planet” (2010, p. 96-97).

Unfortunately, few educators are able to identify the connection between high-stakes testing and the current ecological crises we face. The fact is, even if those engaged in dialogue regarding sustainable issues were to reach some kind of ecological equilibrium with or without current structures of power, this balance cannot be sustained when the generation of students currently being schooled today assumes their role in the current cycle of supply and demand. With prescribed state standards, ideas like reaching out to learn from and with indigenous cultures are not even on the map. Technology is being promoted within the structure of the state apparatus, and only in an effort to meet the demands of standards and testing. Critical thinking is limited to only a few viewpoints that still share the same sentiments within the existing social structure and issues of sustainability have only begun to penetrate the lessons of individual classrooms.

Never before has a movement like the one described by Kahn in Critical Pedagogy, Ecoliteracy, & Planetary Crises been needed as much as it is today. As Kahn raises the alarm to “educate the educators,” and to engage in a dialectical approach to understanding the production and uses of sustainability education and technology, we must engage others into radical action that resists the one-dimensionality that current schooling is increasingly fomenting in students at all levels. As Freire suggests, and as Kahn willingly accepts and challenges us to follow through on: we must first and foremost walk that path, as we learn to talk it.