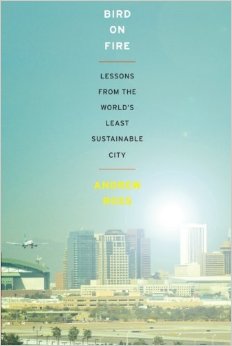 Abstract: Andrew Ross’s Bird on Fire: Lessons from the World’s Least Sustainable City outlines the past, present, and future of development for the Phoenix area. He succinctly and compellingly argues that it is not only urban sprawl or rising levels of pollution that render this city unsustainable, but political and business agendas, the commitment to growth, and hostility towards immigrants all contribute to the challenges of maintaining Phoenix.

Andrew Ross competently covers the past, present, and future of urbanization in Phoenix in Bird on Fire: Lessons from the World’s Least Sustainable City. In fewer than 300 pages, Ross successfully argues that it is not simply the sprawling suburban layout that makes Phoenix’s outlook so dubious—it is also the political attitudes, commitment to growth, and hostility towards immigrants that weigh down the city. Historically, the metropolis has subsisted “in a state of denial about its inhospitable location” (p. 5), but development that dismisses the Sonoran desert has been only one reason why the rapidly-growing city faces a litany of looming dangers.

Arguably more than any other city, Phoenix has been clouded by the illusion of infinite expansion: economic development, housing markets, suburbanization, resource consumption, and population growth were all rising phenomenally in the decades prior to the Great Recession. The infrastructure of the city, which stands as a testament to the assumption of unbreakable market frenzies, is exceptionally captured by Ross, who walks readers through a textbook case of exurban sprawl in the opening chapters, and revisits those themes of growth in chapter 7. Urban renewal projects and the push for an eco-friendly downtown area are covered in the third chapter. The consequences of environmental injustices and eco-apartheid in the Phoenix region are described in chapter 4. Chapter 5 describes how Arizona missed a perfect opportunity to invest in solar energy in the late 2000s, but some Phoenicians gradually came to see clean energy development as a chance to attract new industrialists. As shown in the sixth chapter, Ross does not just frame unsustainability as an environmental issue, but also as an issue of social injustice with respect to anti-immigrant sentiments in Arizona. The eighth (and final) chapter reconnects problems both environmental and social in nature, and revisits some of the local movements working towards alleviating those ills. With that said, Ross makes a very convincing case that Phoenix is challenged by its unviable practices on multiple fronts, and he accomplishes this by portraying the metropolis as embedded in unsustainable politics, immigration policies, housing bubbles, expectations of growth, and increases in emissions.

Ross uses two years’ worth of interviews among active residents to outline the variety of opinions regarding Phoenix’s chances of becoming more maintainable. While his writing is consistently readable and journalistic, and his research agenda is developed and sophisticated, he fails to acknowledge the biased nature of a few of his interviewees and does not correct their inaccuracies. Perhaps in the name of sharing the viewpoints of his interviewees as objectively as possible, it appears that Ross allows some contentious remarks to slip by unchallenged. For example, he cites a climatologist who thinks Arizona has been the state worst-hit by recent warming—without considering hurricane damage in coastal states, drought in the High Plains, or Oklahoma’s fantastically hot summers of late (p. 5).  When a city manager casually states that Honolulu, Hawaii is the city with the highest population density in the nation, Ross does not inform the readers that Manhattan’s density is actually much greater (p. 11). The exaggerated population forecast that the Phoenix region could hit 9 million residents within a few decades is left undisputed (p. 15). Furthermore, Phoenix Mayor Phil Gordon says that he believes “carbon neutrality” means not adding to existing levels of emissions, (p. 10) but Ross does not use this as an opportunity to immediately comment on the mentalities that are devoted to unsustainable practices that engulf Phoenix. Gordon, by the way, whimsically aspires for Phoenix to become “the greenest city in America” (p. 9), but given Gordon’s laughable definition of “carbon neutrality,” his definition of “the greenest city” is most likely equally foolish. Given the extreme unlikeliness of the “least sustainable city” becoming “the greenest city,” Ross could have done a better job seizing these comments to point out yet another illusion enveloping Phoenix—the romantic belief that it can quickly change from an environmentalist’s nightmare to a shining beacon for the rest of the planet’s large cities.

In any case, the book remains highly relevant because it sheds light on the copious unenlightened, overly optimistic, and growth-oriented definitions of sustainability that endanger the megalopolis. If Mayor Gordon feels that “neutrality” means “not adding to current emissions levels,” then he is presupposing that the current levels of carbon emissions are acceptable, environmentally tolerable, or somehow justifiable. This definition is even more problematic considering that Arizona has “added fossil-fuel pollutants faster than any other state” (p. 5). Bird on Fire adds to the discussion of sustainability because it describes the unrealistic definitions of sustainability, and it shows how those definitions have contributed to naïve expectations of growth in a region becoming ever-more climatically and socially fragile. Equally important is the revelation that despite some Phoenicians’ best efforts to change the direction of their city, the investment in “greening” Phoenix has not undone the damage created by the previous decades of uninhibited expansion.

The lessons of Bird on Fire are therefore quite troubling. Urban planning conversations typically idealize technological advances in the hopes of moving towards “sustainable futures” for communities, but are still done within the context of real estate market growth. Despite the backlash against the state’s anti-immigration legislation, Arizona still remains a bastion of nativism. In the face of abundant sunshine and worsening air quality, attempts to increase solar energy and regulate greenhouse gases have been stifled by fossil fuel interests. Groundswells of progress are becoming more prominent, as Ross clearly maps, but Phoenix still seems surprisingly destined to continue down its same unsustainable path. Clearly, more work needs to be done if the fifth largest city in the United States can survive the turbulent decades ahead. Anyone interested in the difficulties of urban planning—particularly within the context of the American West, housing bubbles, influxes of migrants, and global warming—will appreciate Andrew Ross’s captivating writing and thorough coverage of the challenges surrounding development.