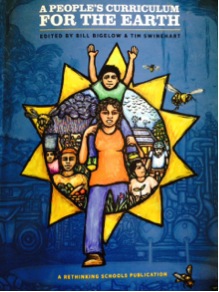 Abstract: The anthropocene era is one that is rife with ecological and social crises. Although many have been aware of the enormity of these problems and their systemic roots, the widespread educational response has not been sufficient in preparing youth to take part in creating a more just and sustainable world. Climate change is an umbrella issue for much of what the world is facing. It is time for teachers to be supported to take the lead in using the classroom as a place to bring relevant, critical, joyful education that will lead to action. The following article is a book review for A People’s Curriculum for the Earth.  Oriented towards the high school classroom, this powerful resource helps educators equip students to confront our interconnected global crises, especially the climate crisis, while highlighting stories of teachers, activists, and organizations working to make a difference.

Pedagogies for Hope and Transformation: A Book Review for “A People’s Curriculum for the Earth” by Bill Bigelow

U.N. Secretary General Ban Ki Moon has called climate change “the defining challenge of our time” (United Nations, 2008). Yet, the curricular response within the U.S. educational system has thus far been neither sufficiently widespread nor effective enough to create the massive changes in lifestyle, policy, and systems that are direly needed. Leading education theorists point to the fact that climate change education has overwhelmingly been taught through a natural science lens (Selby & Kagawa, 2012). While this approach is important, it is not proving to empower youth to actively engage in solutions. This methodology has also failed to facilitate critical thinking about the roots of the crisis:

Climate change learning experiences have, thus, tended to be confined within ‘business as usual’ parameters. There has been minimal recognition of the need to engage learners in openly debating and discussing the roots, and societal implications of climate change scenarios that are likely to play out during their lifetimes, and what needs to be done and achieved of a transformative nature by way of mitigation. (Selby & Kagawa, 2012, p. 5)

Furthermore, teaching resources in this field rarely acknowledge the interconnectedness of the dilemma within its social justice and economic contexts. McKeown and Hopkins (2010) argue that decades of environmental education experiences have shown that raising awareness and factual information alone will not bring about the transformative learning and behavior change that is necessary (pp. 17-18). In this time of profound unraveling of social and environmental systems, there is a need for education about climate, but also perhaps a more crucial requirement for education for change. McKeowen and Hopkins (2010) write “Education for change will help people lessen negative changes, adapt to change, and promote positive change” (p. 18).

Introduction to A People’s Curriculum for the Earth

Bill Bigelow is curriculum editor of Rethinking Schools magazine. He co-directs the online Zinn Education Project and is co-editor of A People’s Curriculum for the Earth, in addition to his contributions to many other progressive education publications through the years. Bigelow is part of a growing movement advocating for climate change education that is interdisciplinary, social justice-based, participatory, and transformative, and that, therefore, equips youth to take action on issues that matter. He is passionate about the potential for public education to empower young people with the skills to analyze the roots of large-scale global issues, empathize with those who are affected most, and organize their communities to become more active and resilient in the face of widespread change. A People’s Curriculum for the Earth (2014) provides teachers with accessible tools to help their students do just that.

After realizing that little was being done to discuss climate change, the end of cheap energy, and resource depletion among K-12 educators, Bill Bigelow and Tim Swinehart took on the challenge and compiled a compelling resource. Bigelow and Swinehart write:

It’s hard to say where the idea for this book originated. It may have been in 2007 when we looked at Modern World History, the new global studies textbook our school district, in Portland, Oregon, purchased. The book began one of its three miserable paragraphs on the climate crisis with the statement ‘Not all scientists agree with the theory of the greenhouse effect.’ And it was buried on page 679. This was the best that Portland could offer its high school students? (Bigelow & Swinehart, 2014, p. ix)

The result of their efforts is a collection of articles, role-plays, simulations, stories, poems, lesson plans, and art to help teachers facilitate transformative climate change education in the classroom. Radically interdisciplinary, the book covers the ecological, human, political, cultural, and economic dimensions of this complex crisis. A People’s Curriculum was created with an emphasis on the need to cultivate a worldview of interconnectedness for students between environmental and social justice issues:

Yes, the ‘environment’ is about polar bears, dolphins, redwood forests, and bees; but it is also about human beings—workers, consumers, families and community members. We call this book a people’s curriculum for the Earth because we try to keep the focus on the inextricable link between nature and people. (Bigelow & Swinehart, 2014, p. ix)

Another central theme is that all humans are being affected by climate change; and yet, different groups of people are suffering the consequences profoundly unequally based on geography, race, and class (Bigelow, 2015).

The introduction alone covers such topics as education for systemic change, a critical analysis of capitalism in the classroom, how to cultivate joy amid crisis, curricular apartheid and its antithesis — interconnected, interdisciplinary learning for resistance, creativity, and hope. The book is full of engaging, thought provoking essays by contemporary leaders in the field, including Vandana Shiva’s “Two Views of Nature” (p. 25), Derrick Jensen’s “Forget Shorter Showers”(p. 268), Van Jones’ “Plastics and Poverty” (p. 4), Terry Tempest Williams’ “We Know What’s Going On” (p. 238), David Suzuki’s “Smarter Than Your Average Planet” (p. 8), and Winona LaDuke’s “Uranium Mining, Native Resistance, and the Greener Path” (p. 321), among many others. Additionally, there are contributions from educators who are active in the field covering topics such as the way in which some forms of education actually teach youth to have contempt for the earth, written by Bigelow (p. 40), and Ann Pelo’s chapter on learning the stories and histories of where we live so that we might help students to develop an ecological identity (p. 47). In the chapter “Burning the Future,” teachers are shown ways that they might teach about fossil fuels and how to teach against fossil fuels, too (p. 179).

Bigelow and Swinehart’s (2014) commitment to interactive pedagogy is also made apparent and accessible through several role-plays and simulations. A high school humanities teacher, Brady Bennon, contributed a role-play that helps students to connect emotionally with climate refugees like those in the island nation of Kiribati (p. 118). “Food, Farming, and Justice” is another experiential exercise based on La Vía Campesina, a social movement that is potentially the largest in the world but is almost never found in mainstream textbooks (p. 366). The creators of the activity, Bigelow, Buehler, Treick O’Neill, and Swinehart, designed it with the goals of introducing students to these little known, but incredibly inspiring agents of change. They also wanted to make clear the relationships between food, farming, “community, public health, climate, economic justice, jobs, and nature” (p. 367). The Kiribati lesson plan and three others from the book are now available at no cost through the Zinn Education Project at: http://zinnedproject.org/2015/03/new-environment-teaching-activities/ [3]

From cover to cover, A People’s Curriculum for the Earth is an outstanding resource for both the newly engaged and seasoned eco-justice educator. It excels in the diversity of teaching tools and support offered. Critically analyzing root issues, social justice, interconnections, and collective systemic action are the core emphases of the learning. These approaches offer fresh and greatly needed ideas for the field of education. The pedagogical use of storytelling and the introduction to contemporary, diverse activists that are at the front lines of the struggle are also known to be highly effective for building empathy and inspiring young people towards action. A People’s Curriculum for the Earth gives young people opportunities for “rehearsals for justice,” as Bigelow calls them. It creates a space for students and educators together to gain skills for getting involved by transforming apathy and cynicism into an exciting sense of active hope and possibility.

Bill Bigelow began teaching high school social studies in Portland in 1978. In addition to A People’s Curriculum for the Earth, he is the author or co-editor of numerous books including The Power in Our Hands: A Curriculum on the History of Work and Workers in the United States, Rethinking Columbus: The Next 500 Years, Rethinking Our Classrooms (Volumes One and Two), Rethinking Globalization, The Line Between Us, and A People’s History for the Classroom. He is currently the curriculum editor for Rethinking Schools magazine and co-directs the online Zinn Education Project. He lives in Portland, Oregon, where I had the opportunity to interview him.

Bigelow, B., & Swinehart, T. (Eds.). (2014). A people’s curriculum for the earth: Teaching about the environmental crisis. Milwaukee, WI: Rethinking Schools.