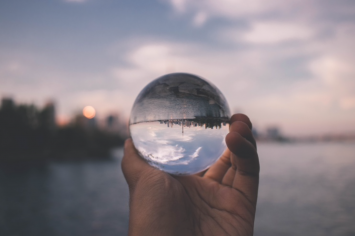 Abstract: After 20 plus years as a sustainability educator, the author had one of those lie-awake-at-night-staring-at-the-ceiling experiences where she faced some hard questions about the state of the world. In this article, she describes her subsequent journey investigating the role of listening in shifting to a life-sustaining society and her Ph.D. research into how to support listening across differences to address complex social-ecological challenges.

By the time I was getting ready to start my Ph.D., I had spent over 20 years working in one way or another to support the shift to a life-sustaining society. Most of this time was at the K-12 level. My goals were to connect young people with the other-than-human world, support their understanding of the systems that support life on this planet, build their capacity as communicators and participatory decision-makers, and inspire action and agency for sustainability. I did several degrees in this field and worked in many different capacities in several countries to advance these goals. I had a clear professional purpose. In the early days of the Ph.D. coursework phase, however, I had one of those lie-awake-at-night-staring-at-the-ceiling experiences.

I suppose you would call it an existential professional crisis.

Reflecting on the state of the world, I had to face the fact that despite decades of effort on the part of thousands of educators like me, things were not better than they were in the 1970s and 80s when environmental education efforts began in earnest. In fact, by most metrics, the social-ecological challenges were worse.

So, what was wrong?

Capable, passionate people the world over had devoted their lives to this work. There was regular evidence—both anecdotal and in peer-reviewed studies—of transformative learning in students who participated in sustainability-oriented learning initiatives. Why didn’t this translate over the long term into resolution of the myriad issues that face us?

There are undoubtedly many answers to this question, but the one that rose to the surface for me was about communication, and in particular, about how humans listen to one another, especially to those who think differently. I came to suspect that a significant challenge in moving forward on any issue is the ability of those involved to listen to ideas and opinions that challenge their own. As a life-long student of communication, it occurred to me that while we need to collaborate across boundaries (Senge et al., 2008)—across disciplines, organizations, and sectors to address complex challenges like climate change, for example, humans really aren’t cut out for listening to ideas and opinions that are different from our own.

Our biology works against us.

Faced with an opinion or idea that is different from our own, it is common for humans to immediately entrench into our own position(s) and seek to persuade others to see things as we do. This is because our opinions, especially our opinions on topics that matter to us, may be unconsciously fused to our identity so that any perceived challenge to our opinion can feel as though we are personally under attack. This triggers a strongly self-protective neurobiological response rooted in our evolutionary survival strategies (Bohm & Nichol, 1996). This well-known fight-flight-or-freeze response produces a number of physiological effects in the body: increased heart rate, rapid breathing, clenched jaw or fists, tight belly, etc. There may also be an emotional response and when emotions run high, the middle prefrontal cortex of the brain can become overwhelmed and unable to perform its calming, integrating role within the brain (Siegel, 2010). As the prefrontal cortex goes offline, a number of key capacities are lost, including: attuned communication, emotional balance, response flexibility, fear modulation, empathy, insight, moral awareness, intuition, and bodily regulation (Siegel, 2010).

Part of the protective response is to narrow our focus, which is useful in enabling rapid, survival-driven action. Consider that running from a hungry carnivore in the forest is not the time for complex analysis and thoughtful reflection. When the threat is experienced in the face of a differing opinion or idea, however, this narrowing is problematic. It has the effect of physically locking us in our own, singular perspective, which makes it extremely difficult to engage openly with those who think differently (Hamilton, 2015; Siegel, 2010).

So with all of this, it’s no wonder that for all the work of well-meaning educators, significant progress on the most challenging issues that face us is elusive. The issues are pressing and affect lives and livelihoods. People on all sides of every issue care deeply and hold their views closely. In the face of an idea or opinion that challenges our own, we move immediately and involuntarily into a defensive stance where we justify our position and try to convince the other to see things as we do. We can also disengage by either changing the subject or leaving the conversation all together. Unconsciously equating our view with our sense of self, these are natural, self-protective responses, but they are a hindrance when the goal is to bring diverse stakeholders together to solve complex problems.

What is a pathway forward given the need to work across boundaries with those who think differently and given the realities of our neurobiological responses in the face of different views and opinions? How can we listen to one another so that we can learn and work together to address complex social-ecological challenges?

I became very interested in theoretical physicist, David Bohm’s notion of suspension (Bohm & Nichol, 1996). Suspension begins with simply imagining that I am holding my idea, view, or opinion as though outside myself. I could imagine it as being tethered to my wrist, perhaps like a helium-filled balloon—safely attached—not going anywhere, but just a bit outside of me. This sounds like a small movement, maybe even a silly exercise of the mind, but it is not. It’s transformative because by holding it just outside myself, I make space to listen to others.

Instead of being full of my own ideas…and all the reasons that I am right…and all the reasons that you are wrong… and all the ways I might convince you to see things as I do (which essentially amounts to listening to myself), I empty my cup like the student was invited to do in the story of the Zen master and the tea cup. By creating that space, by emptying my cup—even briefly—I am able to hear and I am much more likely to understand the views of the other; not agree necessarily, but better understand. When working to resolve and address social-ecological challenges, that understanding is critical: It becomes the foundation for the development and implementation of solutions that work, at least in part, for all stakeholders.

I was captivated by the idea of suspension, but there was a problem: I couldn’t see how I could practice it in the heat of the moment in the throes of the involuntary reactivity response. What could interrupt that response to enable me and others to slow down and consciously choose to practice suspension?

That’s where mindful awareness comes in.

In my 8-week dissertation action research inquiry, my co-researchers and I found that short mindful breathing and body scan practices, conducted a few times a week over a period of a few weeks gave us the ability to quickly scan our thoughts, feelings, and body sensations in the moment in our interactions with others. This momentary scan enabled us to notice the early signs of reactivity (rapid heart rate and breathing, clenched sweaty hands, tight belly, etc.). And the noticing itself, coupled with a few focused breaths, was usually enough to interrupt that escalation into reactivity. This had the effect of slowing the interaction and making it possible to consciously choose how to respond. We found that we could choose to defend or disengage if the situation warranted that. We also found that we could choose to practice suspension and inquire into the views of another.

In the process, we were surprised to notice that, even without telling them what we were doing, or inviting them to practice with us, those with whom we interacted seemed to match our approach: We found that they responded with greater curiosity about our views and ideas. A more open and often pleasant exchange ensued.

Sometimes we changed our minds; mostly, we did not.

But each time we chose to practice suspension, we learned something.

We learned more about the opinions of others—often including some of the underlying concerns, fears, needs, and hoped-for outcomes that shaped them. We learned about our own views by reflecting on them with a bit more distance and perspective. We developed a broader and richer understanding and we created, or bolstered respectful human connections with those who see things differently. We used that understanding and that connection to generate solutions and resolve problems. In short, using a mindful approach to suspension was transformative for us, both personally and professionally.

Since that sleepless night those years ago, I’ve come to see that affecting external change in the world rests, in large part, on the foundation of an inner capacity:

The capacity to listen.

We need to work across boundaries to address complex social-ecological challenges, like climate change. We need to work with all kinds of people, including, and maybe especially with people who think differently than we do. Noticing and managing the involuntary neurobiological response in the face of different ideas and opinions is possible. Accessing the space to consciously choose to practice suspension to more productively engage with those who think differently is possible. These are listening skills that can be developed with a small investment of time and energy.

I have come to see that capacity development of this kind is essential for anyone working to support the shift to a life-sustaining society.