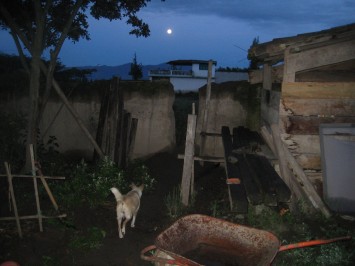 When we began down the road to making this edition of JSE, we had mapped out a route, but knew not where the journey would take us.  With proofs in galley, we face V.S. Naipaul’s “Enigma of Arrival,” knowing that the larger journey has only just begun.  However, if a lesson has emerged from these pages (screens?), it is the power of geographic metaphor for guiding our thoughts and actions regarding sustainability, most of them paradigmatic binaries in a dichotomy mindscape constructed in our Western thought.  .  Geography, as the environmental science “par excellence” assimilates every aspect of who we are, and the spaces that we inhabit, providing a powerfully rooted blueprint for teaching and learning about sustainability.  The connection between geography and sustainability is strong.

The Map:  Now and then

What is the primal attraction of a map?  Is it not perhaps the original communication—the way that people came to explain themselves, and where they found themselves in their space?  On the one hand, the map strives to represent an exact portrayal of a given reality that perfectly represents the space we confront.  And yet, inherent in its construction is the fact that it will change, as it is made, as it is used, as it is revised, and as the spaces are influenced by our own inhabitation.  Isn’t this at the essence of sustainability education—portraying where we are at now, and mapping a future that brings greater fulfillment, in a cartography that is ever changing?  Some of our authors, such as Martina Neuburger and Ernst Steinicke [2] bring us traditional landscape maps, looking for the factors in their environments of interest that might bring better livelihood to the multiple peoples of the earth.  Others, such as Deirdre Wilcoc and Gary J. Brierley [3], give us a conceptual guide to sustainability.  We have blueprints from Karen Kensek (link) for better built designs and many case studies of local landscapes that look to improve our human spaces.  Jenny Finn [4] even maps the inner geography of the mindscape that comes to us with each breath.

Scale is not about size, but about perspective, and again geography provides sound metaphors at either level in the seascape or in terrestrial ecosystems.  Of course sustainability is global, and we see this in the “grand questions” about climate change from Ken Young [5] or food provisioning in Pramod Parajuli’s [6] creative poetic essay.  But we also see the wonderfully useful application of sustainability concepts in the classroom from Anouchka Rachelson [7] or Yukiko Inoue [8].   Whereas scale can be a purely mathematical concept, as the geographer’s map scale tool shows us, scale also takes us into a myriad of worldviews where, as in Hayao Miyazaki’s “Secret World of Arrietty” (look for the review soon here in JSE), the ‘—scape’ in front of us depends on the size of our own thinking.

Geography, with its emphasis on spaces and ‘—scapes’, stands out at the threshold of every discipline—neither science nor humanity, neither art nor engineering, geography embraces all.  We are delighted that this edition includes engineers and architects, like Erik Pappas [9] and Terri Norton and Matija Raovic [10], environmental scientists, like Maceo Cerillo Martinet [11], social justice proponents, like Randall Amster [12] and many cross-disciplinary workers of all kinds, not to mention the geographers themselves.  The trope of the different geographies, to incorporate hybrid approaches of the physical and the cultural under one comfortable canopy where people in their dendritic spaces perform the rhyzomic function of planetary wellbeing, is what counts, as shown by Axel Borsdorf, Rodrigo Hidalgo and Hugo Zunino [13] in their comparative study of amenity migration.  From an educational viewpoint, geography brings all these perspectives together in a way that makes sense for sustainability.

Vercoe and Brinkmann [14] bring us a “Tale of Two Sustain abilities” where they contrast the dramatic difference between a Northern “developed” notion of sustainability as it relates to minimizing human impact on the environment, with a Southern “underdeveloped” desire for sustaining the fundamental necessities of life.  This lesson, above all others, emerges as one reads through this issue of JSE, and we come to grips with the multiple perspectives, the many maps, the different scales, that form the topography of current societies and create the fabric of each of our lives.  In this regard, the emerging great lesson from the South, especially in the Americas, of the “El Buen Vivir”—the notion of finding life fulfillment in every aspect of what we do and how interact (contrast with “The Good Life” based on material wealth) is so nicely brought to us by Eduardo Gudynas and Alberto Acosta [15].

It is easy to see sustainability as the legacy of the environmental conservation movement.  However, decades of struggle suggest that conversationism and environmentalism have not easily incorporated the fundamental fact of change that an evolutionary world imposes.  Geography, on the other hand, recognizes that people want stability—a mapable environment— but that stability rests on a rich history of interaction, modification and improvement of that environment.  We hope you’ll share the way our authors bring a positive spin to sustainability by focusing on the interaction between people and their spaces— multiple ‘—scapes’ that we inhabit.  This, we believe, is where true education about sustainability—education that maps out an ever-more-fulfilling future—will happen.

The process of finding and enhancing sustainability then becomes one of organizing and moving through the spaces in a way that contributes to their richness—not such a bad way to live a life on any level, from the interior intellectual mindscape to the homefront and our local landscapes to the political-ecological lifescapes of our neighborhoods and countries to greatest expanses of our continental worldscapes.  The many maps we build will change as we navigate through them, adapting to change in a positive way, or, as Carol Harden [16] puts it “dancing” with the lightest of footprints.

Enjoy this special edition of JSE.  Send us your comments.  Geographically yours,

Comments Disabled To "From Mindscapes to Worldscapes: Navigating the ever-changing topography of sustainability."

Nice use of prefixes for ‘scape. You left me thinking in the place to put references to fundscape and aidscape typical of conservation and development scenarios.

Congratulations to the editors and all of the authors! This is an incredible resource for geography education in sustainability. We are sharing it with our program participants around the world. Excellent timing for the Rio+20 summit, too.