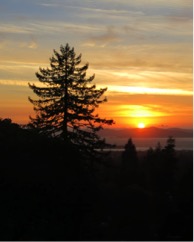 The human condition can almost be summed up in the observation that, whereas all experiences are of the past, all decisions are about the future….  The image of the future, therefore, is the key to all choice-oriented behavior. The general character and quality of the images of the future which prevail in a society are therefore the most important clue to its overall dynamics.  (Boulding, 1973, p. v)

The gap between vision and current reality is also a source of energy. If there was no gap, there would be no need for any action to move towards the vision. Indeed, the gap is the source of creative energy. We call this gap creative tension. (Senge, 1990, p. 150)

Johan Rockström (2009) and a team of international scientists have created a framework to understand and articulate the planetary boundaries or thresholds within which humans can safely operate (p. 7). These thresholds include climate change, ocean acidification, stratospheric ozone depletion, nitrogen and phosphorous cycles, global freshwater use, land system change, rate of biodiversity loss, atmospheric aerosol loading, and chemical pollution. They have reported that for four of these nine thresholds—climate change, rate of biodiversity loss, the nitrogen and phosophorus cycles, and land system change—we are presently outside the boundaries (Steffen et al., 2015). This puts us in uncertain territory in which we may expect non-linear change (Rockström et al., 2009).

Ecological footprint calculations offer us another lens through which to understand human impact on the planet. These indicators suggest that the global ecological footprint, is about 1.6—that is, globally we are using the resources of over one and half earths (Global Footprint Network, 2017). This overshoot can be understood as living off credit or shifting the burden to future generations. Wade Davis (1992) described it this way: “We have contaminated the air, water, and soil, driven wild things to extinction, dammed the rivers, torn down the ancient forests, poisoned the rain, and ripped holes in the heavens” (p. 25). Despite this destruction and excess, we are not even meeting the basic needs of all people on the planet: While world hunger has declined since 2000, over 790 million people, or approximately one in nine people on the planet are still underfed, most of these in sub-Saharan Africa (United Nations Statistics Division, 2016a). At the same time, approximately 1.8 billion people are exposed to contaminated drinking water (United Nations Statistics Division, 2016b).

We can do better than this.

We can do better than this, and yet, the sustainability movement has not been able to deeply engage the mainstream in Canada and the US: “Despite encouraging signs, ignorance, disinterest, apathy, and opposition are still prevalent” (Moser & Dilling, 2007, p. 3). Why is this so?  The following four answers to this question are in no way intended to be exhaustive. First, there is a temptation on the part of those who work to communicate the importance of sustainability to try “to break through indifference and apathy by using fear appeals….” (Moser, 2007, p. 69). Research has demonstrated that while fear-based communication strategies do attract attention and have demonstrated effects on verbal expressions of awareness, they also can disempower people and lead to apathy and disengagement (O’Neill & Nicholson-Cole, 2009, p. 374; Moser & Dilling, 2007, p. 11; Moser, 2007, p. 68, 70).

If these messages do inspire action, it is reactionary; it is motivated by resistance—by the desire to run away from what we don’t want.

Second, sustainability is seen to conflict with our basic values and way of life (Moser & Dilling, 2006, p. 7). There is an impression that to achieve sustainability in Canada and the US, we will need to dramatically compromise our standard of living. Sustainability is associated with restraint, lack, and limitation.

Third, we are limited by Newtonian ideas about change. I believe that we apply contradictory scientific theories to our situation: On one hand, we are fearful because scientists use the language of complexity theory and point out the real dangers associated with triggering non-linear change in social-ecological systems, and on the other hand, we apply Newtonian thinking when we consider the effectiveness of solutions. Believing that we require a herculean effort to push the world, willing it, and forcing it to change (Wheatley, 1999, p. 19), our planetary challenges seem daunting. “Psychologists have found that if we believe there is no hope of overcoming a problem, many of us assume an uncaring posture to protect ourselves…[but] our earth can’t afford overwhelmed, discouraged people who are too depressed to engage” (Lappe, 2011, p. xii). We need a “fundamental shift in perception—from complexity as an obstacle to complexity as opportunity” (Westley, Patton, & Zimmerman, 2007, p. ix).

Finally, and most significantly, I believe that sustainability has not become the central issue of our time (despite planetary and social indicators that suggest it should) because we have failed to generate compelling, positive visions of what sustainability looks like. We have largely pointed at what we don’t want, or what we want to move away from; we have spent little time and energy considering what it is that we want, or what we would like to move toward. “There is an old saying that says there exists only two fundamental sources of motivation in human affairs: desperation and aspiration” (Senge et al, 2008, p. 52). Collectively, we default to desperation. Donella Meadows (1996) explained that vision is the most vital step in the policy process. If we don’t know where we want to go, it makes little difference that we make great progress. Yet vision is not only missing from almost entirely from policy discussions; it is missing from our whole culture. (p. 1).

This fall, we put out a call for papers asking for your visions for the future, but we did so at a time when the present was all-consuming. Since November, and particularly since the inaguration of President Trump, the barage of daily news about executive orders, appointments, and polices that clearly plot a course away from sustainability and thrivability is almost paralyzing. It is as though those of us who work to promote sustainability have been in a state of shock since the US election in November, finding ourselves transfixed by a grotesque present moment reality that is equal parts terrifying and demoralizing. These have not been ideal conditions from which to develop hopeful and positive visions for the future.

Perhaps there has been a need to pause—to feel the dark feelings that arise from this new reality in the same way that we need to truly feel the grief, anger, and pain of a personal trauma. Perhaps we have needed to allow ourselves the space and time to feel all the revulsion and horror and shock of it. As the Women’s March demonstrated so beautifully, however, we do not need to dwell in this place. Millions of people around the world marched peacefully together, ultimately issuing the message:

We can do better than this.

But we need to define ‘better’. We have re-issued the call for papers for future-casting articles to create a space to do this in the Winter 2018 “Art, Social change, & a Vision of Sustainability” issue [3] of the JSE . Over the next few months, we invite you to reflect on your dreams for a thrivable, equitable, beautiful future. What do you really want? What is your aspirational vision for the future? What is it that you want to move toward?

We would like you to describe a desired future of a particular place, or the desired future as it relates to a particular issue. What does it look, sound, smell, and feel like to be in this future? Then—as though from that future place—articulate the role of sustainability education in getting us there. How did we learn to live in better balance with the natural life support systems of this planet? What role did education play in inspiring people, young and old, to create systems that work for everyone?

In order to do this, we encourage you to release yourself from current reality and fear-based projections that paint sustainability in a dreary light, and instead dream inspirational dreams. Let us captivate and motivate one another with our visions and use the creative tension that arises between the present moment and these visions to fuel our efforts to bring them into reality.