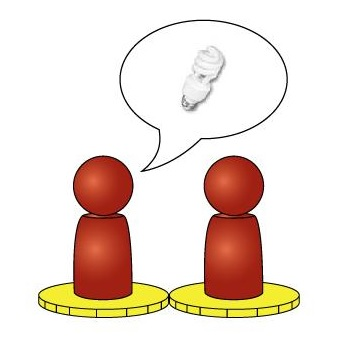 Abstract:  As sustainability educators and communication professionals consider various strategies to engage audiences with regard to household energy use, one option now seemingly available is to leverage social networks by encouraging people to share information with others they know. At the same time, we currently do not know enough about the potential spread of energy-related information in this fashion. Whether, when, or how people share energy-related information with peers or family members are crucial questions, for example. Using national survey data from U.S. residents (n=816), we predicted energy information sharing as a function of objective energy knowledge (measured using a factual energy knowledge index), perceived energy understanding, and demographic variables. Our analyses underscored the importance of assessing not only factual energy knowledge but also perceived understanding, as both are equally predictive of energy information sharing frequency (β=.11, p<.05, for objective knowledge and β=.11, p<.01 for perceived understanding). Number of children also predicted energy information sharing, β=.11, p<.01. We discuss the implications of these results for informal energy education efforts in the 21st century.

Energy conservation professionals seeking to address consumers face important choices between public information strategies that simply emphasize factual knowledge and social marketing efforts that can facilitate sustainable change. As Stokes and colleagues (2012) have observed, energy-related behaviors appear to be a function of multiple predictors over and above general knowledge about, or attitude toward, energy conservation. Demeo, Feldman, and Peterson (2013) have argued that energy literacy should be taught in schools in conjunction with discussion of human ecology, suggesting that facts about energy production, for example, do not offer insight regarding consumer decision-making. Moreover, environmental education efforts in recent decades also have evolved as project officers and personnel have shifted from attempts at knowledge provision toward more comprehensive audience engagement endeavors (Monroe, Andrews, and Biedenweg, 2008). Environmental education efforts that address community interaction and acknowledge that audience members are not isolated targets for persuasion currently appear to be en vogue.

Science communication scholars have noted for years that interpersonal communication is an important channel that may impact information diffusion, persuasion and decision-making related to science and health (Morton & Duck, 2001; O’Keefe, Ward & Shepard, 2002; Southwell & Torres, 2006; Southwell & Yzer, 2007). Despite this evolution of perspectives, the question of how to spark community dialogue and promote information-sharing nonetheless remains not fully answered. We address one aspect of that question here with specific regard to interpersonal sharing of household energy tips, recommendations and information.

Specifically, we explored whether factual knowledge drives information sharing or whether additional perceptual dimensions might also play a role. Is a person’s tendency to share energy-related information a function of how many facts they know about energy or does it also stem from other factors, such as their own perception of confidence and fluency in engaging the topic? We hypothesized that perceived understanding of energy – one’s sense that energy is a topic that people like themselves can understanding – would be associated with tendency to share energy-related information with others, as phrased in the following hypothesis.

Hypothesis: Perceived understanding of energy will positively predict information sharing about energy, over and above objective energy knowledge and demographic variables.

After developing survey items and using the Question Appraisal System (Willis & Lessler, 1999) to assess potential respondent challenges, staff administered a web-based survey to a nationally representative sample of respondents from Knowledge Networks’ KnowledgePanel® from late September to early October 2011. After three days in the field, email reminders were sent to non-responders. Survey invitation response was reasonably high: 59 percent of those invited completed the survey screener (of which 81 percent were eligible for the survey as non-institutionalized adults residing in the United States who reportedly were as, or more, familiar with energy decision-making as anyone in their household). Participants received the equivalent of $5 in non-monetary reward point incentives for participation. At the end of data collection, 816 respondents completed the full survey. All results reflect the use of a post-stratification weighting variable developed post-hoc by Knowledge Networks to adjust for potential response bias relative to a national adult population.

Based on the assumption that energy understanding entails not only factual knowledge but also the ability to engage and interact with dynamic information, we assessed three main concepts as potential predictors: energy knowledge, energy bill interpretation ability, and perceived understanding of energy. (See also Southwell, Murphy, DeWaters, and Lebaron, 2012, for discussion.) We also measured respondents’ tendency to share energy information with others as an outcome variable and additionally included a series of demographic variables, as reflected in our final model. Demographic variables included age, sex, highest educational degree obtained, household income, presence of children under 18 in the household, home ownership (versus rental), and residence in an area of high population density (or Metropolitan Statistical Area).

Perceived understanding of energy.  Prior to asking about factual knowledge and the ability to interpret numbers presented on an energy bill, we asked respondents for a summary judgment of the extent to which people similar to them can understand the general topic of energy.  We adapted a measure previously developed and reported by Southwell and Torres (2006) to assess perceived understanding of science and mathematics.  Using a five-point scale, we asked respondents the extent to which they agreed or disagreed with the following statement: “Energy is a topic that people like me can understand.”  Responses ranged from “strongly agree” to “strongly disagree”.

Energy knowledge.  To assess actual energy knowledge, we developed an 11-item index using items drawn from a recent study of high school student energy knowledge (DeWaters & Powers, 2011). We consulted with officials at the U.S. Department of Energy regarding the selection of items and also focused on those items that fared best using the Question Appraisal System. The final set of items addressed central aspects of energy use and consumption in the United States. For example, we asked “Which uses the most energy in the average American home in one year?” and offered a variety of multiple choice responses, including the correct answer (“heating and cooling rooms”).

Energy bill interpretation ability.  Several survey items focused on interpretation of a hypothetical energy bill formatted to appear as a typical bill and displayed as a graphic figure in the questionnaire. For example, we asked, “Using this month’s energy usage total, if the average rate was $0.12/KWH, what would the month’s charges be (before taxes or the renewable energy rider)?” and offered a series of multiple choice responses (including the correct response). We assessed responses to individual items and computed an index (ranging from zero to three) that reflected the number of correct responses a respondent submitted across the three bill interpretation questions.

Tendency to share energy information with others.  We asked people whether they recently shared information about energy with others in their social network. Specifically, people were asked, “In the past month, how many times did you share specific information about energy use or energy conservation, such as a news article or a tip that you heard, with other people?”  Responses ranged from “never” to “more than 5 times,” (M= 1.48, median = 1, and SD = .76).  We also asked respondents what specific means of sharing they used, including face-to-face conversation and posting or forwarding via the Internet.

Results suggested a paradoxical state of energy understanding among respondents. Most respondents reported that people like them could understand energy (M=4.04, SD=0.84). At the same time, most respondents answered less than 60 percent of the knowledge items correctly. After applying post-stratification weights, the median score on the 11-item energy knowledge index was 6 (M = 5.80, SD = 2.48), meaning half of all respondents scored less than 55 percent on the test. (Scores ranged from 0 correct to 11 correct among respondents and were essentially normally distributed.) While a relatively high percentage of respondents (81 percent) were able to successfully complete at least one of the three bill interpretation tasks, only 27 percent of respondents completed all three tasks correctly. Scores on the bill interpretation task index ranged from zero to three (M= 1.67, median = 2, and SD = 1.07).

Clearly, cognitive factors beyond one’s factual knowledge about energy production and household energy use affect a person’s decision to share energy tips and recommendations with others. Consequently, programs intended to unleash the potential for peer-to-peer information sharing would be well-served by a focus on bolstering conversational confidence and facilitation of interactions among family and friends. Believing that others like you can understand energy matters in predicting information sharing over and above the extent to which a person can accurately answer questions about energy facts. That might reflect conversational constraints – it can be challenging to interact with others regarding a topic they do not understanding – or might reflect the impact of topical competence on one’s hesitancy to initiate or engage exchanges with others in a particular arena. Either way, environmental communication professionals intrigued by the possibilities of working with social networks, either through social media campaigns or through more old-fashioned encouragement of talk between neighbors, should heed these results.

Additionally of interest is the finding that people with children also were more likely to discuss energy related topics. This pattern could be a function of everyday situational demands, as parents may tell children to turn off the lights after leaving a room, for example, or to turn off the water when brushing teeth and may consider that interaction to constitute energy information sharing. These discussions may actually be more utilitarian in nature than extensive and deep as parents teach children proper habits and attempt to keep costs associated with running the household to a minimum. Nonetheless, such interaction is part of the constellation of behaviors related to sustainability. Future research should examine exactly what information related to energy is discussed or shared most often and whom these interactions involve.

In sum, social networks offer a potentially important pathway for the spread of sustainability information related to household energy use. Presently, however, many people in the United States do not actively share such information with others. Moreover, predicting who does share energy information requires not only information about what people know factually but also about the extent to which they are confident in their ability to understand.

Stokes, L. C., Mildenberger, M., Savan, B., & Kolenda, B. (2012). Analyzing barriers to energy conservation in residences and offices: The Rewire program at the University of Toronto. Applied Environmental Education & Communication, 11, 88-98.