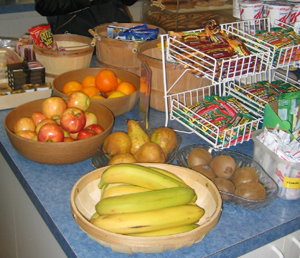 [1]The interdisciplinary study of food has emerged as a theme in sustainability education at Catlin Gabel School [2], an independent, co-educational school with 725 students in preschool through 12th grade in Portland, Oregon. The focus on food—a necessity for human life, and a subject of much recent thinking worldwide in terms of sustainability—touches many disciplines across the school and touches our learners from age 4 to 18.

A Big Step in Thinking About Sustainability: The Natural Step Framework

The school has long identified sustainability as an important direction. This direction received an important boost during the spring of 2007, when more than 45 community members participated in a series of half-day workshops on the socio-ecological principles of the Natural Step [3] framework. Natural Step posits that in a sustainable society, nature is not subject to systematically increasing concentrations of substances extracted from the Earth’s crust, concentrations of substances produced by society, or degradation by physical means, and people are not subject to conditions that systematically undermine their ability to meet their needs.

During the series of engaging workshops, teachers and staff members from each school division, Middle and Upper school students, parents, alumni, and trustees chose to explore one of three topics: facilities, food service, and curriculum. Food appeared as a key theme in each of these topic groups.

These figures are determined by our janitors, who weigh each school division’s landfill contributions daily and record the weights on a clipboard log sheet. Data from the log sheets is transferred to an electronic spreadsheet for monthly reporting to all students, teachers, and staff members. Students participate in the Zero Waste by 2012 initiative as part of their experiential education. 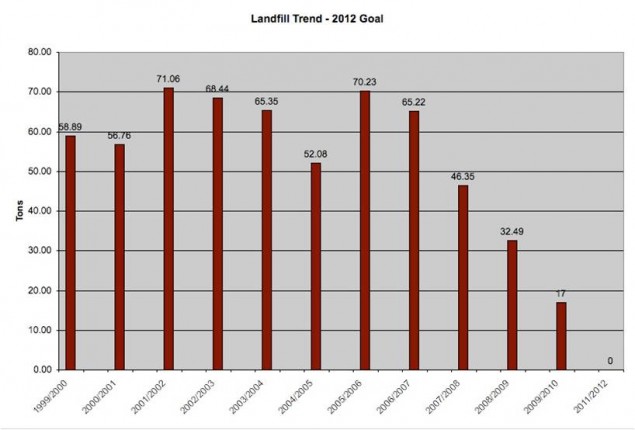 Catlin Gabel began analyzing and altering its food source selections based on Natural Step principles after the food service workshop. The school began listing its food sources on the school’s internal website, and posting lunch menus on the external website at http://www.catlin.edu/ [2]. Current food sources include eggs and produce from a nearby small farm and fruit from Parkdale and Scio, Oregon. Organic potatoes and winter squash come from a farm in Hillsboro, Oregon. Grass-fed lamb is sourced from Canby, Oregon, and beef from Scio, Oregon. These food sources are all within 150 miles of the campus.

In a big change from previous practices, the food service began using washable dinnerware instead of throwaways. In the cafeteria area, housed in a former barn (and called the Barn), students have learned to separate food waste from recyclables and the landfill contributions in a series of containers. 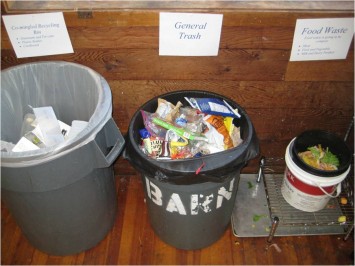 The Barn kitchen separates out pre-consumer vegetable trimmings, which are then fed to chickens and goats. In an unusual departure from the norm, Catlin Gabel has established a small herd of goats on campus for management of invasive plants. The goats also serve as a learning tool, as students help grounds staff move the goats from area to area during campus days. 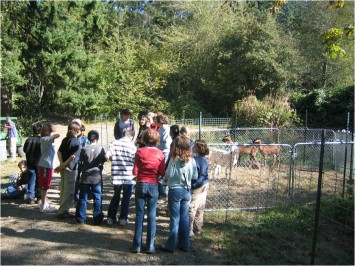 Post-consumer food waste goes into the school's hot compost system, which was designed and built by the grounds staff. Finished compost is used in raised beds at the Middle School garden. 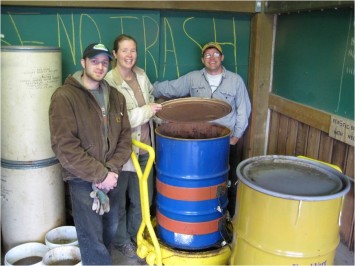 Members of the grounds staff monitor the health of the goats.

Catlin Gabel has also considered the transportation component of food deliveries and its resulting impact on local air quality. Rather than separating food-related transportation from employee commute trips, the school tracks the total number of vehicles entering campus. Students receive weekly reports estimating the carbon dioxide emissions from vehicles that come onto the campus. Employees who use alternative forms of transportation receive a $1 per day credit for food in the cafeteria. As a result, 7,426 commuters used alternative transportation in 2008-09, and 15,389 fewer vehicles entered campus than in the previous year.

Monthly emails to all students and teachers raise awareness about the comparative amount of waste that each division generates—which the school hopes also creates impetus for change.

Throughout the 1990s, fourth grade faculty members led by example through efforts to recycle copy paper, and Middle School faculty members led Can-Dow-Ment, an endowment funded through collections of refundable bottles and cans. Winterim, the Upper School experiential learning week, often touches on themes of food, including one workshop in 2006 that explored sustainability in the city of Portland. Students and teachers toured a local food co-op, pressed apples at a farmers market, and watched an discussed the film Future of Food. They also visited Hot Lips Pizza (a model of sustainable business practices) with owner David Yudkin, a Catlin Gabel parent, as well as Zenger Farm and the Permaculture Farm & Institute.

Lower School students, grades one to five, take care of worm farms, and these worms find a good life in the garden and compost pile. During the 2009-10 school year to date the Lower School generated an average of 1.08 ounces of landfill waste per person per day, which is the lowest throughout the school.

First grade students start seedlings to plant in the garden later in the spring and during early summer.

Fourth grade students regularly compost, recycle, and reuse food and supplies for the classroom. Teachers have purchased dishes to wash and use during classroom celebrations.

Fifth grade students follow the pitchfork to plate process. Working directly with farmers and businesses, children study different planting and farming methods, view packing plants, and follow food to their plates at home. Along the way students study the consumption of energy and the social and environmental choices that must be made along this journey.

Farmers speak to students about their lives and work. Students hold a potluck where they make a dish from scratch and write the recipe as an essay, using only fresh, local (defined as within 150 miles from Portland) and organic ingredients. The rules are that their dish should be free of trans-fats, excessive salt, or sugar. Students present their dishes, the sources, and the carbon footprints before eating the meal. 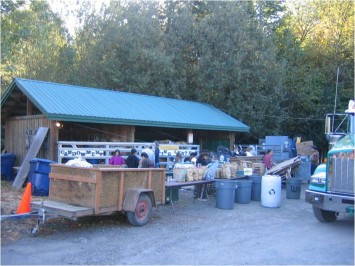 Sixth grade students are studying sources of food and diets around the world.

The first part of the year-long Environmental Science and Policy course looks primarily at the creation, distribution, and consumption of food, largely in the United States but within a global context. This interdisciplinary course combines natural science, economics, politics, ethics, cultural studies and anthropology, statistics, behavioral psychology, and history.

Upper School students also view sustainability and food through an urban planning lens. Catlin Gabel’s PLACE Program (Planning and Leadership Across City Environments) uses urban planning as a tool to examine sustainability in the living laboratory of Portland, Oregon. Students form a consulting firm and complete a real-world planning project for a client, after learning about all facets of sustainability, including social equity.

One class is teaming with graduate students in Portland State University’s Nohad A. Toulan School of Urban Studies and Planning to plan and design four acres at Zenger Farm, a unique urban farm within Portland’s city limits. This is a unique project because the farm is a nonprofit situated in a food insecure neighborhood with a program that caters to youth involvement and immigrant farming. Students are gaining the opportunity to work on issues relating to access to healthy food, which is imperative for a sustainable and equitable community.

In summary, the focus on food is an emerging theme in sustainability education at Catlin Gabel School. This interdisciplinary focus appears in a variety of Lower, Middle, and Upper School courses, including science, history, economics, Spanish, and French. The food theme appears to be spontaneous and takes a variety of forms as individual teachers adapt sustainability education to the circumstances of their particular disciplines. In addition, the school’s food service plays a key role in bringing better food and sustainable practices regarding food to this unique educational community.

Very neat. I’d love to learn more about the $1 food credit in exchange for taking alt transportation to school. How was that exchange developed?