Abstract:  Rather than outline my view of Education for Sustainability as such, I attempt here to address here a deeper frame of reference which helps underpin the nature and task of EfS in relation to achieving a more participative consciousness, essential for our times.

At the time of writing, Britain is being subject to ‘the worst storms for 200 years’, an extraordinary battering with virtually endless rainfall, and widespread flooding and travel disruption, including the severing of the rail link to the South West where I live. It echoes extreme weather events in other parts of the world. Here, amidst the extensive news coverage of lakes and rivers (where there should be fields and roads) and of people flooded out their homes, there is only the most marginal acceptance by media and politicians that it ‘might be’ related to climate change.  Rather, there is a sense of shock and anger: how could this happen?

To many of us working long in the fields of environmental and sustainability education, there are no surprises here.  The long predicted signs of climate change have been evident for some years now – although the sudden onset, severity, and duration of the storms, which have been racing in from the Atlantic for nearly three months now, could not have been foreseen.  However, the general reluctance in the country to acknowledge and accept that this weather pattern is in all probability a manifestation of climate change, is perhaps predictable.

However, it is clear to many that we are entering a different age, and a different world. Al Gore’s extensive study The Future suggests:

There is a clear consensus that the future now emerging will be extremely different from anything we have ever known in the past….There is no prior period of change that remotely resembles what humanity is about to experience. (Gore 2013: xv).

This presents a huge challenge to societies and individuals, and therefore of course to efforts to educate for the chance of a more sustainable world. It has two dimensions. The first challenge is to acknowledge and recognise the scale of change in prospect and its implications.  This first step, as demonstrated by reaction to the weather induced crises mentioned above, is as yet far from won in terms of widespread acceptance. The second challenge, which perhaps even more problematic for many, is to recognise that the way we perceive, think and act is deeply implicated in the global conditions unfolding, that we are participants in whatever transpires.

For years, I have argued – along with many others – that the root of (what David Orr calls) ‘the long emergency’, lies with our worldview.  Nothwithstanding the negative effects and potency of greed, ignorance, abuse of power, fundamentalism and so on, there is a critical mismatch between deeply engrained patterns of thought resulting from our Western cultural and intellectual legacy of reductionism, objectivism, dualism, materialism and so on, and the dynamic and systemic nature of the Earth and the human world (which Gore’s work illuminates).

The world is a complex, interconnected, finite, ecological-social-psychological-economic system. We treat it as if it were not, as if it were divisible, separable, simple, and infinite. Our persistent, intractable, global problems arise directly from this mismatch.

Gregory Bateson, writing earlier still, suggested that Western thought was characterised by what he termed an ‘epistemological error’ which he saw as the root of the ecological crisis. According to Bateson, our collective worldview is founded upon a mis-reading of reality, a perception of and belief in separateness that in turn gives rise to conflict and dis-integration.

I believe that (the) massive aggregation of threats to man and his ecological systems arises out of errors in our habits of thought at deep and partly unconscious levels. (Bateson, 1972: 463)

This perception of and belief in separateness works to a degree, but is ultimately destructive. Hence, Bateson suggests:

Epistemological error is all right…upto the point at which you create around yourself a universe in which that error becomes immanent in monstrous changes of the universe that you have created and now try to live in. (Bateson 1972: 461)

Global warming, to consider just one major critical manifestation, may come to mind on reading this passage. Bateson’s prescient insight  stands as a radical challenge to the individualism, anthropocentrism and dualism of most Western philosophic traditions, and it prefigures what was later called a co-evolutionary, or participative reality requiring a more ecological and relational consciousness.

More recently, futures expert Paul Raskin argues that: ‘The shape of the global future rests with the reflexivity of human consciousness – the capacity to think critically about why we think what we do – and then to think and act differently’. (Raskin 2008: 469). This is a plea for second order and third order learning, which would help us see differently, and therefore act differently.

I have a small problem with lists of sustainability oriented competencies, which attempt to lay out what people should learn and acquire to help them cope with emerging conditions and shape a better world. They do have value, and can be helpful. However, they tend to be dauntingly long: I was recently at a workshop in a UK university where lecturers were attempting to grapple with the forty or so competencies suggested by UNECE (2102) as ‘a goal to which all educators should aspire’.  More seriously and typically, there is little or no analysis of why such competencies appear to be needed. What is deficient about our current values, understandings, and actions? And, as Raskin asks, why do we think what we do?  Without critical reflection at this deeper level, old assumptions and habits  – Bateson’s ‘epistemological error’ will continue operating powerfully and unexamined, and EfS may not work at the transformative level that is needed.

There have been numerous calls over the last thirty years and more for a changed paradigm or cultural worldview towards something more holistic, systemic, and ecological or relational.  It is a long time coming. As Thomas Homer Dixon notes (2009, 3), ‘we often invest enormous mental energy to maintain a perspective on the world that’s at variance with reality’. (My italics).

So how can we achieve sufficient critical reflexivity about ourselves?

My involvement in this broad inquiry through education and over a long period has led me to develop a number of ‘thought models’ that I think help get to the essence of what is required, or – put differently – of what a more ecological worldview and participative consciousness entails.

So the following model starts with the idea of paradigm or worldview  – in other words the framework of human knowing and experience that is operative both at individual, institutional, and societal levels. This can be thought of as having three elements or dimensions: 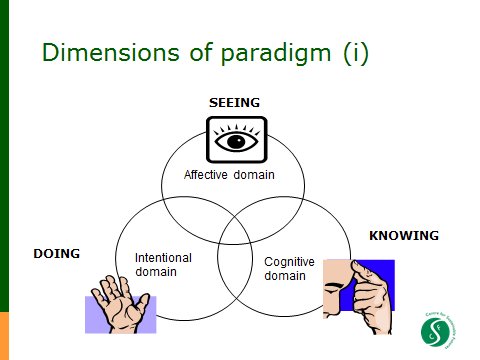 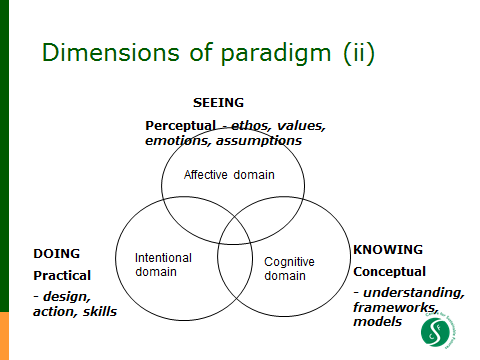 This model helps us to become more reflexive about our mental frameworks, to engender a positive and engaged response to the ‘different world’ we are both creating and encountering. To explain further, the three aspects of paradigm are:

capacities, skills, tools, methods, designs, and communication. This is the practical domain – how we act on and in the world, and with others.

In the area of Seeing, the key problem currently is one of narrow boundaries, of egocentrism, of lack of awareness or care for ‘the other’, and limited spatial and temporal inclusion.

In the domain of Knowing, the key problem is over-specialism, and lack of understanding of, and thinking congruent with, systems, pattern, connectivity, consequence, interdependence, and so on.

In the domain of Doing, the key issue is lack of ability to design, decide, and influence in a way which promotes integrative and synergetic behaviours and actions that add to overall systemic wellbeing rather than the reverse.

In sum, we are creating a highly interconnected world economically, technologically, ecologically, yet our dominant worldview is essentially non-relational. Therefore, in each of these areas, a necessary shift towards ecological consciousness and competence involves a movement – a response – as follows:

Seeing domain: need for ‘respons-ibility’- an extended and ethical sense of concern/engagement and awareness; seeing the part (individual, organisation, community etc) as part of a greater whole;

Doing domain: need for ‘respons-ability’- the ability to take integrative and wise action in context.

An alternative way of putting this is: a re-thinking of assumptions, distinctions, and intentions/actions (as shown in the table below). This is needed to heal the narrowness of perception, disconnective thinking, and disintegrative practice so often manifested both in education and society:

This holistic, three-part model of paradigm change can be understood or employed in various ways:

the heart, head and hands of the individual learner.

I suggest that this model shines a light on a deeper, that is, paradigmatic level of consideration than is normally part of competency discourse, but which helps provide an underpinning rationale for it. This foundation endorses but also clarifies the role and task of transformative learning, which – in our current times – needs to be at the heart of policy and practice in education for sustainability.  We need to do what we can to cultivate as far as possible an ecological consciousness. This involves a shift away from relationships largely based on distinction, separation, control, manipulation and excessive competition and consumerism, towards those based on such values as participation, appreciation, synergies, community, self-organisation, and equity, recognising that we are co-creators of  the world. It is a movement from seeing the world – in ecotheologian Thomas Berry’s words – as a ‘collection of objects’ towards seeing the world as a ‘community of subjects’ of which we are inextricably a part. Given the fact of the Anthropocene age, this change of perception is vital. All the evidence suggests that the course of the next fifty or so years will absolutely depend on whether we – that is, the Western and Westernised world – can achieve a ‘deep shift in values and institutions…..a development that is far from guaranteed’ (Rosen et al 2010:15).

The paradigm model outlined here, is not in itself of course, ‘the answer’.  But it can help us recognise the cultural building blocks of  reductionism, objectivism, materialism, dualism,  separation and determinism in our psyche and thinking which have served us well in the past but which are now deeply problematic, and ‘at variance with reality’. Rather, it helps sustainability educators recognise and work for a shift of thinking towards participatory consciousness, a worldview of sustainability – embracing holism, critical subjectivity, engagement, contingency and complexity – necessary to winning a more sustainable world, while there is still time to do so.