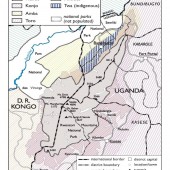 [1]Alpine tourism in the attractive, glaciated highlands of Eastern Africa’s national parks has traditionally been considered an engine of regional development. The major question this article examines is the significance of this economic sector and whether it can contribute to sustainable regional development. The research area is Mt. Kenya and the Ugandan Rwenzori; the detailed studies were conducted in the most intensively visited tourist areas, i.e. at the foothills of the two massifs: in the Mobuku Valley in the eastern Rwenzori, and at Naro Moru west of Mt. Kenya. In addition to analyses of the current state of the art as well as of official statistical data, our conclusions are derived from own surveys, mapping activities and household observations.
The results show that economic benefits from mountaineering tourism in the Mt. Kenya region are fewer than commonly calculated, mainly because of the low occurrence of tourism. Moreover, existing incomes are low, inconsistent and distributed unevenly. There are clear parallels to the critical structures characterizing the Rwenzori mountains in Uganda: alpine tourism does not reduce regional income disparities and largely fails to promote sustainable development. Nevertheless, community-based tourism, as shown by the example of the Rwenzori Mountaineering Services (RMS) in the Rwenzori National Park and of the Guides & Porters Safari Club (GPSC) in the Mount Kenya National Park, stabilizes the livelihood of rural households and reduces the vulnerability of families. Whereas in the Mt. Kenya area, most of the regional households are involved, in the Rwenzori mountains the favorable effects of alpine tourism are concentrated in just one valley (and support only one twelfth of the entire Rwenzori population). Thus, its contribution to sustainable regional development is negligible.